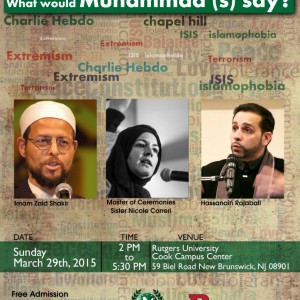 In the name of God, the most Beneficent and the most merciful

In recent years, it has become more apparent that little is understood about Prophet Muhammad (s). Whether it be the representation in the media or attacks on his behavior, issues prevalent today portray a one-sided approach. However, to examine the reality of the situation, to fully understand what the faults in these representations currently are, it is important to analyze Prophet Muhammad’s character, his actions, as well as this modern representation of Prophet Muhammad and people of faith from around the world. With the

This Qur’anic verse has been proven true, for when one studies the biography of Muhammed (S), one will find that he demonstrated attributes of kindness, honesty, generosity and forgiveness, to name a few amongst many traits, to both his friends and foes. Therefore, it was his mercy and guidance that transformed one of the most barbaric societies, into a civilized state. 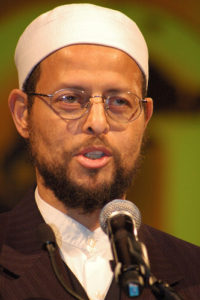 Imam Zaid Shakir is a co-founder, chairman of the board, and senior faculty member of Zaytuna College located in Berkeley, CA. He is amongst the most respected and influential Islamic scholars in the West. As an American Muslim who came of age during the civil rights struggles, he has brought both sensitivity about race and poverty issues and scholarly discipline to his faith-based work.

Born in Berkeley, California, he accepted Islam in 1977 while serving in the United States Air Force. He obtained a BA with honors in International Relations at American University in Washington D.C. and later earned his MA in Political Science at Rutgers University. While at Rutgers, he led a successful campaign for divestment from South Africa, and co-founded New Brunswick Islamic Center formerly Masjid al-Huda.

After a year of studying Arabic in Cairo, Egypt, he settled in New Haven, Connecticut and continued his community activism, co-founding Masjid Al-Islam, the Tri-State Muslim Education Initiative, and the Connecticut Muslim Coordinating Committee. As Imam of Masjid Al-Islam from 1988 to 1994 he spear-headed a community renewal and grassroots anti-drug effort, and also taught political science and Arabic at Southern Connecticut State University. He served as an interfaith council Chaplain at Yale Universityand developed the Chaplaincy Sensitivity Training for physicians at Yale New Haven Hospital. He then left for Syria to pursue his studies in the traditional Islamic sciences.

For seven years in Syria, and briefly in Morocco, he immersed himself in an intense study of Arabic, Islamic law, Quranic studies, and spirituality with some of the top Muslim scholars of our age. In 2001, he graduated from Syria’s prestigious Abu Noor University with a BA in Islamic Sciences and returned to Connecticut, serving again as the Imam of Masjid al-Islam, and writing and speaking frequently on a host of issues. That same year, his translation from Arabic into English of The Heirs of the Prophets was published by Starlatch Press.

In 2003, he moved to Hayward, California to serve as a scholar-in-residence and lecturer at Zaytuna Institute, where he taught courses on Arabic, Islamic law, history, and Islamic spirituality. In 2004, he initiated a pilot seminary program at Zaytuna Institute, which was useful in Zaytuna College’s refinement of its Islamic Studies curriculum and its educational philosophy. For four years, students in the pilot program were engaged in the study of contemporary and classical texts. In 2005, Zaytuna Institute published, Scattered Pictures: Reflections of An American Muslim„ an anthology of diverse essays penned by Zaid Shakir. He co-founded the Lighthouse Mosque, Oakland, CA. in 2007. He authored an award-winning text, Treatise for the Seekers of Guidance, a translation and commentary on Imam Harith al-Muhasibi’s work, Risala al-Mustarshideen in 2008. He is co-founder and chairman of United For Change since 2009. The mission of United For Change is, through modern discourse, to create awareness of the broadest and most consuming topics within the Muslim community. The aim is to leverage the diversity through cooperation and goodwill and address the obstacles that have proven to be divisive. His most recent work is Where I’m Coming From: The Year In Review, a new collection of his essays from 2010. Imam Zaid has also authored numerous articles and research papers on a wide range of topics.

He is a frequent speaker at local and national Muslim events and has emerged as one of the nation’s top Islamic scholars and a voice of conscience for American Muslims and non-Muslims alike. Imam Zaid has served as an advisor to many organizations, and influential leaders. Recently, Imam Zaid was ranked as “one of America’s most influential Scholars” in the West; by The 500 Most Influential Muslims, edited by John Esposito and Ibrahim Kalin, (2009).

While many have cited Imam Shakir as example of Islamic moderation, his critics have questioned his moderate credentials by citing his expressed hope for the conversion of America to Islam and adoption of Islamic law in America. Dr. Ingrid Mattson stated that Imam Zaid is solidly grounded in the Islamic legal, ethical and intellectual tradition, which all Muslims share, as well as his personal understanding of the current political context. 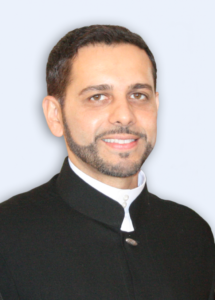 Hajj Hassanain Rajabali, is a popular speaker currently living in Dearborn, Michigan and has traveled worldwide to lecture on Islam. He is a graduate of the University of Colorado with a degree in molecular biology and psychology. Hajj Hassanain recently moved to Dearborn from New York where he was Principal of the Tawheed Institute, He is currently is the director of Camp Taha, the world’s first Muslim owned camp located in Columbiaville, Michigan. He came to settle in the U.S. in 1975, emigrating from Tanzania, East Africa. Hassanain is considered by many to be one of the most powerful and inspiring speakers of Islam. 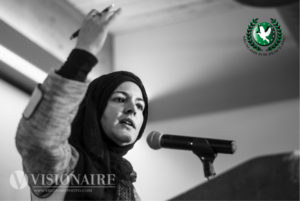 Sr. Nicole Correri, a convert to Islam since 1994, received her B.A. in Psychology, Minor in Early Childhood Education from George Washington University, graduating Summa Cum Laude and her M. Ed. in Counseling from George Mason University, graduating with Honors. She is also a member of numerous academic honor societies, including Phi Beta Kappa. She completed a year and half of doctoral course work in Clinical Psychology, also at GWU. Since 1994, Sr. Nicole has been a student of Islam and an educator in the East Coast and around the world, lecturing at mosques, Islamic camps, and Islamic conferences. Sr. Nicole has been a speaker at the UMAA convention in 2009, and 2011-2014.

Her emphasis has always been to bring a deeper understanding of Islam to her audience, as well as a practical and meaningful connection to one’s spiritual life. She has also had the opportunity to introduce Islam to students in private school, university, and community college, as well as members of local churches. Currently she is homeschooling her two daughters utilizing Waldorf pedagogy, in which she has also completed her teacher training. Her eldest attended the Waldorf High School on its first ever scholarship award for two years and is preparing for an early entry into college.

Sr. Nicole also does consulting work in the field of Waldorf Education through her business entity, Ensaniyaat – Achieving Potential LLC.

Rev. Dr. LL DuBreuilis the Pastor of Faith United Church of Christ in Union, New Jersey. She currently serves at the request of Senators Raymond Lesniak and Tom Kean Jr. with FLAV (Faith Leaders against Violence) a coalition of religious leaders to combat violence in the name of religion. She also is active in the Municipal Alliance and the Community Relations Commission for the Township of Union.

Dr. DuBreuil is a graduate of Rutgers University and New Brunswick Theological Seminary and has worked professionally in theater, business, and as a public school teacher of English and Theater. Her commitment to community service has led her to work tirelessly for social justice and interfaith understanding.

Free admission and parking. Food will be served.

Please invite all your friends and family to this event. We thank each and everyone of you for your continued support throughout these years.