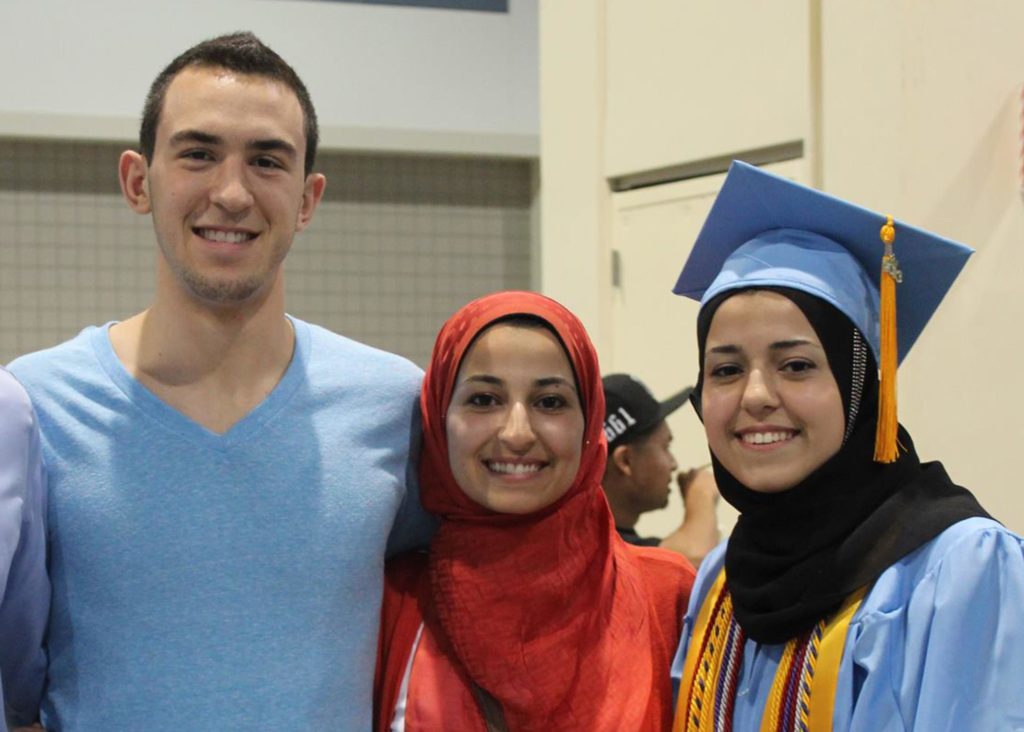 Muslims for Peace strongly condemns the shootings of three young American Muslims in Chapel Hill which took place on February 10, 2015. They were murdered execution style at a University of North Carolina in what is believed to be a hate crime against Muslims. The alleged killer is reported to be a white man who claims himself to be an atheist. There is absolutely nothing about the lack of belief in a god that supports the murder of innocent people or doing any kind of harm to anyone. Our hearts and prayers are with the families and friends of Deah Shaddy Barakat, 23, his wife Yusor Abu-Salha, 21, and her sister, Razan Abu-Salha, 19. May Allah grant these souls the highest station in Heaven.

Islamophobia – prejudice against and hatred towards Muslims has sadly increased over the years and more hate crimes are taking place nowadays. Unfortunately, mainstream media outlets have given little or no attention to these horrific acts of terror.

Terror of any kind is intolerable and the universal principles of justice and equality must prevail to all people regardless of their faith, color, or background. Every human being should have the right to believe in what they believe and the religion of Islam gives respect to different religions.

We call on state and federal law enforcement to thoroughly investigate this heinous crime and to prosecute the suspect to the fullest extent of the law. We lend our voices to the pleas of the Barakat and Abu Salha families and request that these murders be investigated as a hate crime to prevent further attacks on innocent citizens and the loss of more American lives. As studies continue to show, for over a decade there has been a steady rise of anti-Muslim sentiments, hate speech and violence, which may be linked to negative media coverage and unchecked hateful rhetoric launched against Islam and the Muslim community.

President Barack Obama released a statement Friday on the shooting of three members of a Muslim family.

“Yesterday, the FBI opened an inquiry into the brutal and outrageous murders of Yusor Mohammad Abu-Salha, Deah Shaddy Barakat, and Razan Mohammad Abu-Salha in Chapel Hill, North Carolina. In addition to the ongoing investigation by local authorities, the FBI is taking steps to determine whether federal laws were violated. No one in the United States of America should ever be targeted because of who they are, what they look like, or how they worship. Michelle and I offer our condolences to the victims’ loved ones. As we saw with the overwhelming presence at the funeral of these young Americans, we are all one American family. Whenever anyone is taken from us before their time, we remember how they lived their lives — and the words of one of the victims should inspire the way we live ours.

Muslims for Peace thank President Obama for his heartfelt condolences on the tragic deaths of Deah, Yusor and Razan.

We also ask that Muslim community members be extra cautious today and in the coming weeks as a result of increased anti-Muslim sentiment. We are receiving information about threats being made against Muslims by individuals who appear emboldened by the Chapel Hill shooting. If you feel your life is in danger or see someone else being threatened, please call 911 for help immediately.

The Almighty God has mentioned in the Holy Quran (2:62): “Those who believe (in the Quran), and those who follow the Jewish (scriptures), and the Christians and the Sabians – any who believe in Allah and the Last Day, and work righteousness, shall have their reward with their with their Lord; on them shall be no fear, nor shall they grieve.”

The community of Muslims for Peace condemns all sorts of violent acts, which must not be tolerated. Muslims for Peace stands in solidarity with the families who have lost their loved ones during this difficult time. Our thoughts and prayers are with them.

Once again, we extend our deepest condolences and prayers to the Barakat and Abu Salha families for their loss.