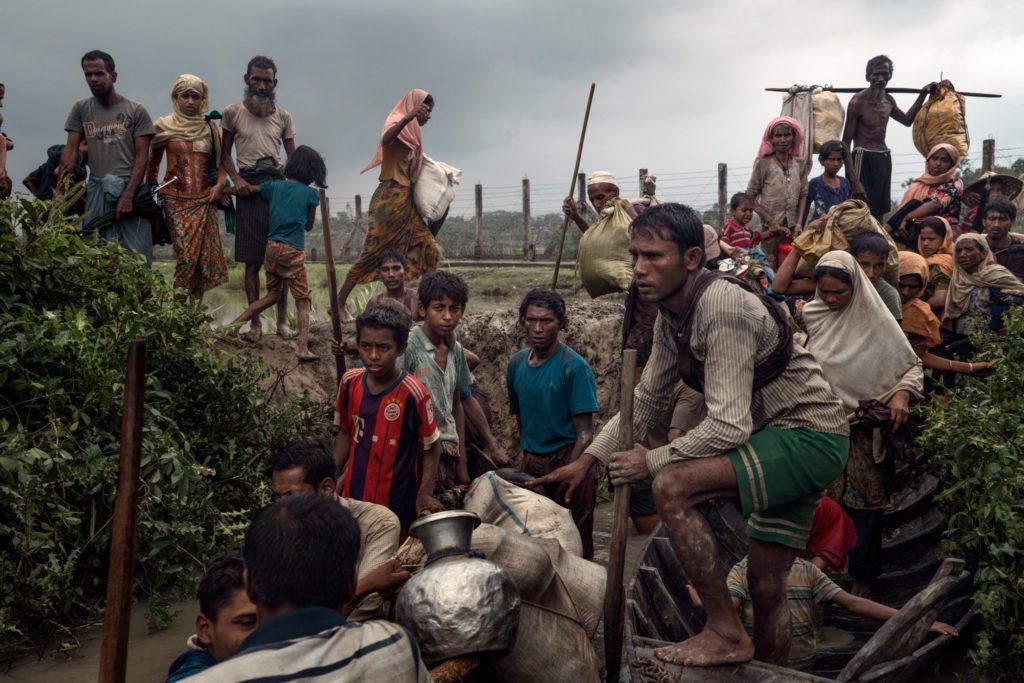 Minorities due to race or religion have often suffered extensively through many time periods and across many nations, even up till now. As late as the 1990s, ethnic cleansing has displaced and taken the lives of hundreds of thousands of people from the Bosnians Muslims and the Croats, Chechens Muslims to the Tutsis of Rwanda and the people of Sudan, particularly in Darfur. Now it is the Rohingya Muslims of Myanmar, who have had their roots in this country for centuries that are being systematically annihilated. The UN human rights chief stated last week regarding the Myanmar military operation against the minority Rohingya people to be a “textbook example of ethnic cleansing,” As of date over 420,000 Rohingya people have fled escaping horrific acts of pillaging, burning, rape, torture, and murder. Many of the victims are innocent women and children. The people have fled by foot on arduous terrain and by river and sea in tiny boats where many have capsized. The situation is so dire that forty percent of Rohyinga villages targeted by the army are now empty. From the 471 villages targeted in a “clearance operations” by the Burmese army since late August, 176 were now empty and 34 others are now partially abandoned. The people who managed to reach the refugee camps in neighboring Bangladesh are living in disastrous conditions with scarcity of food and basic necessities as well as lack of space. Nevertheless, thousands continue to arrive each day. The situation continues to worsen as aid that was sent for the people fleeing was blocked by hundreds of Buddhists.

The unjustifiable violence towards an ethic minority group in Myanmar, along with events that have occurred even in our nation’s own backyard, continue to bewilder us as incidence of white supremacy unfold. It is even more outrageous when complacency towards racial injustices originate from the most upper level of government. For instance, the silent response of the de facto leader Aung San Suu Kyi, in the face of atrocities, against the Myanmar’s minority is alarming considering that she had received the prestigious Nobel Peace prize. Due to this, many have called for her award to be revoked. Correspondingly, rhetoric from our country’s leader regarding the violence in Charlottesville to the immigration ban and policies targeting minorities in the US has also not stopped short of absolute disbelief. What is more, children from immigrant families have now become victims as the DACA program becomes threatened.

These incidences stem due to supremacy. The moment a person or a group of people feel and or even believe that they are superior to everyone else, they instantaneously feel authorized to subjugate others. These individuals in an essence feel/believe that they are entitled, period; whereas, others are not. Hence, the Supremacist does not view others to be legitimate citizens. Subsequently, they are driven out by any means possible, resulting in “ethnic cleansing”.

So how can we stop this unwarranted mass extermination from persisting? Certainly, every tainted heart or mind cannot be changed as all diseases cannot be cured. Nonetheless, the actions of those considering themselves to be superior must be halted. We have already witnessed that remaining silent or offering pretexts only allows the crimes to continue. Therefore, the rest of society must support the oppressed minority and speak up. Everyone should unite with one voice to stop the injustices. Contacting embassies, consulates, representatives and senators etc. as well as organizing protests can prompt positive action. If these matters are not handled, then these crimes will persist. Today, it is one minority group, tomorrow it may be another. Hence, whether it is as far as Asia or it is in North America, crimes committed due to race should not be tolerated because frankly, even then, our silence is acceptance.