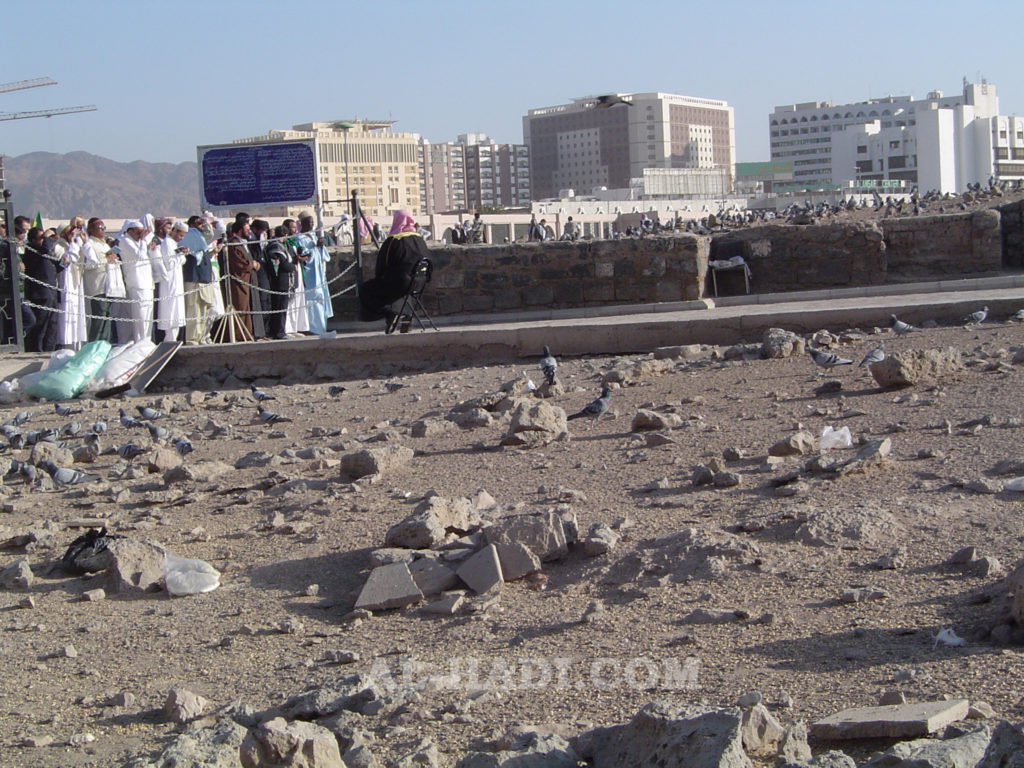 By: Shabbir A. Abbas

In the month of Shawwal, Muslims solemnly mark the destruction of Jannat al-Baqi’ (1345 AH/1925) and other religious sites, specifically gravesites, throughout the Hijāz (region consisting of Makkah and Madinah), by the Saudi family and their para-military known then as the Ikhwan (unrelated to the Egyptian group). Jannat al-Baqi’ is the final resting place of many notable individuals pertaining to the religion of Islam, members of the Ahl al-Bayt, all the wives of the Prophet (s) (except for Khadijah), and his noble companions; prominent among them are Hasan ibn ‘Ali, Zayn al-’Abidin, Muhammad al-Baqir, Ja’far al-Sadiq, ‘Abbas ibn ‘Abd al-Muttalib, Umm Salamah, ‘A’ishah bint Abi Bakr, ‘Uthman ibn Affan, et al. It is reported that an upwards of 7,000 individuals with ties to the Prophet (s) are buried therein, and thus its destruction is considered one of the most heinous of crimes that not only angers all Muslims, but also the Almighty.

Furthermore, it is of the utmost importance to understand why said mazārāt (gravesites) and maqāmāt were destroyed, and why the Saudis are grievously mistaken. The Saudis and their supporters follow the fanatical ideology of Muhammad ibn ‘Abd al-Wahhab, a militant fundamentalist whose literal approach toward the Islamic scriptures (Qur’an and Hadith) has led to great devastation, and continues to do so. Nonetheless, it is in this literalist fervor that they defend their indefensible crime by bringing forth the following hadith:

‘A’ishah reported: The Messenger of Allah (s) said during his illness from which he never recovered: “Allah cursed the Jews and the Christians for they took the graves of their prophets as mosques.” (Sahih Muslim 529)

If read without context (the folly of literalists), this hadith may seem to justify the actions of the Saudis, however, the context is always necessary. The reason for this exhortation by the Prophet (s) was to warn his community against shirk (idolatry), for shirk is the greatest of all sins in the eyes of the Almighty; and guarding against it is indeed a duty for all Muslims. But the context herein, references the Jews and Christians specifically, for they took the Prophets ‘Uzayr (‘a) and ‘Isa (‘a) as sons of God, as deities, this is mentioned in the Qur’an:

The chief difference between the Muslims and those prior, is that at their masājid (places of worship), Muslim worship the Almighty whereas the others worship men. The Prophet (s) was exhorting his community to not worship him after his passing away, and by and far Muslims have not done so. Therefore, this argument against gravesites is irrelevant for Muslims and thus invalid.

When asking for evidence concerning visiting graves and praying therein, one needs not to look further than al-Bidāyah wa al-Nihāyah (The Beginning and the End) of the famed pupil of Ibn Taymiyyah, Ibn Kathīr. This text is considered one of the most authoritative works on Islamic history, for Ibn Kathīr relied primarily on hadith literature, and that too which he graded as authentic. We find in this work:

On the authority of Abu Hurayrah the Prophet (s) used to visit the graves of martyrs [of Uhud] annually. When he would reach the entrance of the mountain, He would salute them (the martyrs): “Peace be upon you for that you persevered in patience! Excellent indeed is the final home!” (13:24)’ Then after the Prophet (s), Abu Bakr also used to come, and after him ‘Umar used to do the same and then ‘Uthman also did the same.”

Continuing on these lines Ibn Kathīr then mentions:

“Fatimah, daughter of the Prophet (s), used to visit the graves of Uhud [specifically her uncle Hamzah’s] and used to weep there and pray.” (al-Bidāyah wa al-Nihāyah, volume 4)

Therefore we find here that not only is visiting the graves of pious persons from the Sunnah, but making it a ritualistic habit of annual visitation is also from the Sunnah (important for those who criticize the practice of ‘Ashurah/Arba’īn), and that the daughter of the Prophet (s) selected this place to pray and receive barakah from the Almighty.

Those in opposition may counter our first point by saying that, fine, visiting the gravesites is from the Sunnah, but where does one receive impetus to build structures over the graves? The impetus is Qur’anic, we read in Surat al-Kahf:

Thus did We make their case known to the people, that they might know that the promise of Allah is true, and that there can be no doubt about the Hour of Judgment. Behold, they dispute among themselves as to their affair. (Some) said “Construct a building over them”: their Lord knows best about them: those who prevailed over their affair said “Let us surely build a place of worship over them.” (18:21)

In exegesis of this verse, Ibn Kathīr writes in his Tafsīr:

“When the people of the cave went into the cave [and died], some people close to the entrance of the cave said, ‘Build a mosque so we can worship Allah.’ The people who said this were Muslims”

Therefore, we find that after the aṣḥāb al-kahf (Seven Sleepers) passed away, Muslims [of that era], not disbelievers, decided to construct a masjid over them in order to worship the Almighty. This is preserved in the Qur’an, and if it were considered a reprehensible act the Almighty would have rebuked them; but He did not and His silence implies consent. Also, the chosen progeny of the Prophet (s) and his noble companions, outrank the followers of all the prophet’s preceding, hence they too deserve the construction of masājid over their graves.

Many a times it is seen that individuals may bow their heads, placing them on graves or the ḍarīh (tombs) enclosing them, this in the view of the opposition constitutes to shirk, for they mistake adoration as prostration. Bowing one’s head in front of a beloved elder, such as grandparent is an automatic impulse, likewise hugging and kissing them, and there is no harm found in this. Nonetheless, the opposition may argue that these type of acts are perfectly fine for the living, not towards the dead. We respond that it is a practice of the rāshidūn to do as such, it is found in Imam Mālik’s Muwaṭṭāʾ:

Yahya related to me from Malik that he had heard that ‘Ali ibn Abi Tālib used to rest his head on graves and lie on them. [Muwaṭṭāʾ Imām Mālik, Book 16, Hadith 34]

Therefore, these acts of adoration are not only allowed but also the practice of the pious companions, specifically those whom are considered the Rāshidūn. If ‘Ali ibn Abi Tālib did as such, there is no speculation on the matter and it is forever permissible.

In summary there is ample evidence in both the Qur’an and Sunnah to not only justify the visitation and construction of mazārāt, but to also declare that it is established firmly in the practice of the Prophet (s) and his companions, both the Ahl al-Bayt and the Rāshidūn. So, the followers of Wahhabism, and the supporters of the House of Saud need to take utmost precaution before throwing around words like shirk, for in effect they label the Prophet (s) and his companions as mushrikun (ma’ādh Allah).

Therefore, with the strongest of words we demand the ruling family in the Hijāz to rebuild Jannat al-Baqi’ in Madinat al-Munawwarah and all the other mazārāt and maqāmāt that they have demolished, and to rebuild them with the grandeur that they rightfully deserve. We also urge the Saudis to return control of the Haramayn (The Two Sanctuaries) in Makkah and Madinah to the Muslims, for they have not only proven to be incapable of maintaining this responsibility, but have acted criminally in this position.