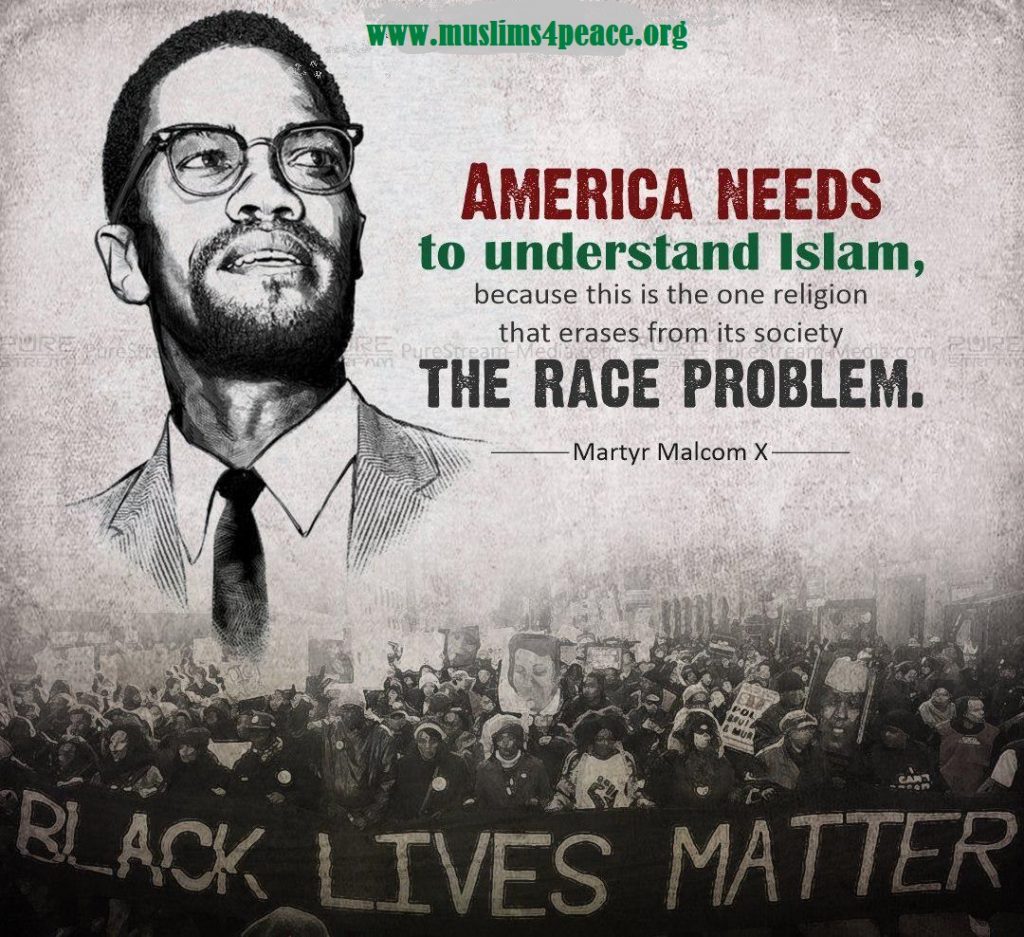 “Never have I witnessed such sincere hospitality and overwhelming spirit of true brotherhood as is practiced by people of all colors and races here in this ancient Holy Land, the home of Abraham, Muhammad and all the other Prophets of the Holy Scriptures. For the past week, I have been utterly speechless and spellbound by the graciousness I see displayed all around me by people of all colors. “I have been blessed to visit the Holy City of Mecca, I have made my seven circuits around the Ka’ba, led by a young Mutawaf named Muhammad, I drank water from the well of the Zam Zam. I ran seven times back and forth between the hills of Mt. Al-Safa and Al Marwah. I have prayed in the ancient city of Mina, and I have prayed on Mt. Arafat.”

“There were tens of thousands of pilgrims, from all over the world. They were of all colors, from blue-eyed blondes to black-skinned Africans. But we were all participating in the same ritual, displaying a spirit of unity and brotherhood that my experiences in America had led me to believe never could exist between the white and non-white.”

This is from a letter written by one who visited Mecca for the first time during the Hajj. The reflections illustrate the awe that one feels while experiencing the true teachings of Islam first hand by performing the rituals, observing the environment and interacting with the people. From an unbeliever to a follower of the Nation of Islam than traversing on to the path of mainstream Islam, Al-Hajj Malik El-Shabazz, previously known as Malcolm X eloquently wrote a letter to his loyal assistants in Harlem from his heart regarding his experiences during the Hajj.

The Hajj is a rite that a believer is commanded to embark upon once in their lifetime if they are able to. It is one of the branches of religion that one must fulfill if conditions are met which is meant to elevate one’s spirituality as well as humble one before their Lord. Every single ritual has a multitude of lessons to teach humankind which becomes an eye opener for a person not only within themselves but with the world as well. Malcolm X realized this from his experience in the Hajj. He then became a revolutionary model for a positive change and sought after it due to the wrong that he witnessed around him. This is illustrated in His letter as he continues to state the following: “America needs to understand Islam because this is the one religion that erases from its society the race problem…..But on this pilgrimage, what I have seen, and experienced, has forced me to rearrange much of my thought-patterns previously held, and to toss aside some of my previous conclusions. This was not too difficult for me. Despite my firm convictions, I have always been a man who tries to face facts, and to accept the reality of life as new experience and new knowledge unfolds it. I have always kept an open mind, which is necessary to the flexibility that must go hand in hand with every form of intelligent search for truth.”