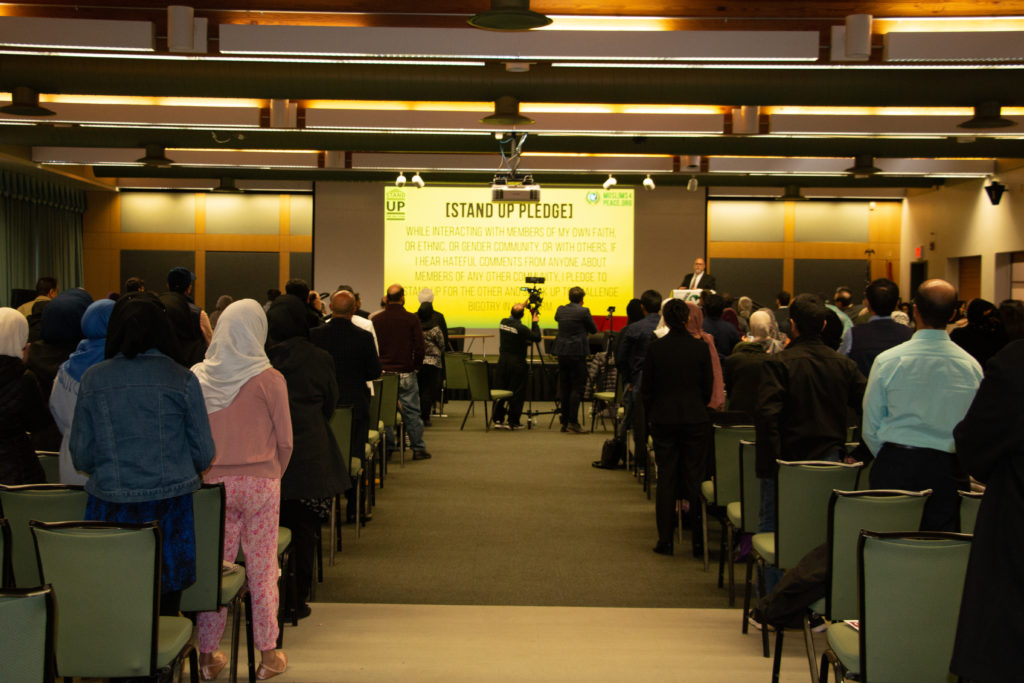 The 13 annual Conference of Prophet Muhammad, organized by Muslims4Peace, commenced with the recitation of a few verses from The Criterion, a chapter from the Holy Qur’an. This year’s conference honoring Prophet Muhammad was centered around the topic of Prophet Muhammad as a Political and Social Reformer. The event was held on March 24, 2019, at Rutgers University.

This year, the organization coordinated an event with a variety of speakers to share their reflections: Sheikh Azhar Nasser, an Islamic scholar. Dr. Abdul el-Sayed, a physician who ran for governor of Michigan; Donna Austin, a professor of anthropology at the University of Rutgers, and Rabbi Marc Kline, Rabbi of the Reform Temple.

These conferences held every year aims to discuss interfaith relations as well as to promote peace with all people. Hence, the commencement of the conference began with the Master of Ceremonies, Rabbi Marc Kline. He explained the purpose of this conference which arises due to faiths being perverted in various ways across the globe. Hence, he stated there is a need to learn about each other, to understand what is happening around the world, and to address and combat these issues. The questions that were posed from the start was: How to send the right message?  Is there a division between our responsibility and our faith; as well as, with the country we live in? Also, is what we are doing, is what our religion or faith teaches us to do?”

Rabbi poignantly stated that he stopped using the term interfaith because there is one faith, and that is the Faith in God. He stated that the divisions occur due to fears and insecurity. He quoted a verse in the Quran from chapter 63, verse 25: “The servants of the All-beneficent are those who walk humbly on the earth, and when the ignorant address them, say, ‘Peace!’ . Thereafter, he stated that it is our obligation to not to turn our backs on those who do not understand, but to embrace each other and to bring peace into this world.

Thereafter, he introduced the first speaker. Donna Austin, an anthropologist, writer, and activist. Her reflections on the Prophet (P) began with current events from last week, which connected with her own spiritual journey and then to the life of Prophet Muhammad. She remarked upon the tragedy in New Zealand regarding the shooting at two mosques by a white male Supremacist. “What would Prophet Muhammad have us do in moments like these?”.  She then spoke about the incident that happened in Pittsburgh, PA  pertaining to Antoine Rose a 17-year-old unarmed teenager who was shot in the back in 2014 by a white male police officer that was captured in a video. The officer in the past week had just been acquitted by a jury of all offenses.

These incidents touched upon her deeply. She recollected that she became a Muslim at the age of 17 because she discovered Islam due to the Hip Hop Music she was listening to at the time. Conscious Rap Artistes who were either Muslims or had Muslim sympathies influenced her as they stood for Social Justice. Through them, she learned about Malcom X, which then lead her to learn about Prophet Muhammad. She stated that the Prophet propagated and enacted Social Justice. Consequently, she endeavored to answer the question which she had posed earlier as to “What Prophet Muhammad would have us do?” She affirmed that he had taught us not to be passive by either our wealth, voices, talents or selves in order to establish justice on the earth. It is everybody’s fight and responsibility. Therefore, it was anti-racism which was part of the spiritual practice that attracted her towards Islam. Furthermore, she gave an example of the Prophet’s mercy of always fulfilling people’s worldly needs before addressing their spirituality. She mentioned Hifdh ul Fuzul during the time of the Prophet and affirmed the need for Muslims to enact that philosophy today. The second point she highlighted was regarding the Prophet’s farewell sermon in which he opposed the superiority of one’s lineage, anti-racism, and gender justice. She closed with the challenge to make a personal pledge to ourselves to execute an action that would establish social injustice.

Subsequently, Sheikh Azhar Nasser gave a profound speech with reflections from the Holy Qur’an. He mentioned the objective from a verse about sending Prophets. He states that the aim is to establish justice and that the Qur’anic perspective of human prosperity is predicated on justice. He further pointed out that God made justice incumbent on himself and made oppression forbidden for ourselves. Interestingly, he stated that the era before Islam was known as the Age of Ignorance, yet the social and political conditions at that time are similar to modern-day conditions. Arabs would fight over even the smallest things. Today there is constant military conflict; moreover, the United States economy is based on war.  There was a large disparity between the rich and the poor, as is seen today; hence, economic injustice. Gender discrimination existed then as it does today. Racism was deeply rooted as is today. Thereafter, he proposed on how to enact change as dictated by the Qur’an. Sheikh Azar quoted Chapter Yusuf, verse 108 which mentions a person should be a person of insight and informed. The verse also mentions working collectively. He stated a person should not be too confident in one’s social activism and to have more confidence in God. Thus, he advised to make an effort, but leave the results to God. He admonished that mistakes will happen, but not to compromise on Islamic values. One should not strip their Islamic identity in order to work for change. He further elucidated that if one wants to make an impact, first establish credibility. Prophet was known as trustworthy and truthful before he was known as a Prophet. Furthermore, he continued with building alliances with those who think similarly.

The Sheikh mentioned the Medina Charter which the Prophet established creating social justice. In this, he affirmed the actions of the Prophet by stating if God gives you power, you should show gratitude by having mercy.

The keynote speaker was Dr. Abdul El-Sayed. He spoke in length about his diverse family and his journey through his career from being a doctor to a politician and what led him there. What is more, with his endeavors he was able to establish the protocol of how lead is tested in schools nationwide. In his speech, he proclaimed that we, as people of different background and beliefs, “do not have to apologize for who we are, we have to remember who we are”. He continued to affirm that our faith and American ideals are all about coming together.

During the program, songs were recited praising the Prophet in Arabic and in various other languages as well as poetry was read about social justice.

Also throughout the program Awards were handed out to the following:

Zamir Hassan was awarded the Humanitarian award. He spoke of his own story of how he became inspired to be an activist and how he founded the program, Muslims Against Hunger. It was a much-needed program given the statistics that 49 million people in the country do not know where they will get their next food.

Muslims Against Hunger has now flourished in 30 cities, five countries, with more than 5000 volunteers. Thus, Zamir Hassan’s philosophy is to engage good people to do good. Rowaida Abdelaziz, a writer of the Huffington Post was given the activism award.

There was also a note from Senator Booker and Governor Phil Murphy in support of the gathering and organization.

Lastly, Dr. Ali Chaudry and the Rabbi created a pledge which was proffered through the New Jersey Interfaith Coalition and signed by the Senate and the Assembly of the State of New Jersey

The pledge was introduced into houses of worship, schools, and workplaces. The pledge was affirmed together in the conference and can be signed online.

Vendors were set up in the area selling a variety of food, clothing, and other merchandise during the event. The conference had an attendance of over 400 people whereby people of different faiths were able to get together and reflect upon the teachings of a man who propagated and enacted social justice 1400 years ago.