The American Muslim community must step up its efforts to counter the wave of Islamophobia that has engulfed much of the current political discourse, especially by current Republican presidential candidate Donald Trump.

That was the core message delivered by speakers at the 9th Annual Prophet Muhammad Day, which took place on March 27 at the Busch Student Center at Rutgers University. More than 500 people attended the event.

One speaker, John Andrew Morrow, minced few words, referring to Trump as “the face of a new fascist movement.”

He said his ideas and tactics run counter to the stances and beliefs of Prophet Muhammad, who stood for inclusiveness and peace.

“ISIS must be stopped…and so must Trump,” Morrow said. “He is a false prophet. He will lead them to death and destruction.”

Laced in Trump’s demagoguery and inflammatory statements are controversial proposals targeting Muslims. They include increasing surveillance on mosques and creating a registry containing the names of all Muslims. Currently estimates of the American Muslim population is between 3 million and 5 million.

Morrow added that while Trump claims to care about the concerns of working-class voters who have fallen victims to job loss stemming from free-trade deals, outsourcing by multinational companies, and globalization, he doesn’t propose anything to change the system.

He said there’s a reason why Trump likes with little education.

“The poorly informed are the easiest to fool,” he remarked.

Sister Linda Sarsour said Muslims in America must do a better job of educating people about the positive impact the community has made in the this country over many centuries. More must be done to close divisions among the different Muslim sects, she said.

“We (currently) are not a strong, resilient and united community,” she said.

“You have to teach them about the history of America,” she said. “Islam is a religion of justice for all people.”

She shared a story exemplifying just that, in which she joined about 100 people, mostly African-American non-Muslims, who wanted action on combatting police brutality by walking to Washington, D.C. from Staten Island, N.Y. The walk was in response to the death of Eric Garner, an African-American man from Staten Island who died following a chokehold by white police officers.

During the 250-mile walk, Sarsour contacted a masjid in Philadelphia to see if it could be used as a sleeping area for a night. Masjid officials agreed and they also provided them with items to ensure a safe trip to the national capital.

“They felt loved and embraced by the community,” she said. “They will be the biggest soldiers defending Islam.”

Sarsour also said women in the community must take active roles to combat the long-running, but inaccurate perception that women in Islam are second-class citizens.

One of the simplest things American Muslims could do is to vote. She criticized the relatively low level of participation Muslims in this country take toward that civic duty.

“It’s a disgrace and a dishonor to the people who dream of that day. It is your obligation and social responsibility to participate in the Democratic process.”

Sarsour said just like Muslims mourn for non-Muslim victims of radical Islam, American Muslims shouldn’t have to avoid publicly mourning for Muslims who also fall victim to it. She mentioned last week’s bombing in Lahore, Pakistan by the Taliban as an example. That bombing, which took place on Easter Sunday at the Gulshan-e-Iqbal Park killed approximately 70 people and injured hundreds more. .

Sheikh Hussain al-Nasheed said Muslims have long been the victims of terrorism and repression, even during Prophet Muhammad’s time. Despite those difficulties, the prophet did many humanitarian acts, including feeding orphans, helping the poor, building relations with the Jews, among other good deeds.

Even when people hurled stones at him as he was leaving Mecca, he refused to have them punished and went out of his way to make sure blood didn’t spill on the ground,

“Forgive them, for they not know,” the prophet would say.

Sharleen Leahey read her poem, “Jerusalem,” which struck a tone of optimism; that hatred among the three biggest faiths will be overcome and harmony will prevail.

Following the speeches, Muslims for Peace, the organization that has put together the event each year, presented awards to various individuals for exemplary service to community and for spreading tolerance. 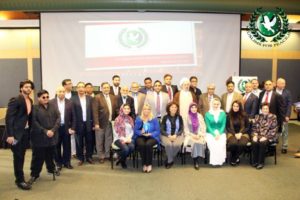