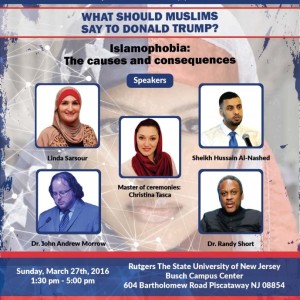 Our 9th Annual Prophet Muhammad (s) Day event will focus on Islamophobia, calling for awareness, concern, and action to move past this fear of Muslims. This program will consist of a panel of prominent speakers with our master of ceremonies, Christina Elizabeth Tasca.

Our guests Hussain Al-Nashed, Linda Sarsour, Dr. John Andrew Morrow, and Dr. Randy Short will speak about the irrational wave of fear of Muslims in the West increasing at a particularly alarming rate. Our special guest Sheikh Fadhil Al-Sahlani will also give a brief speech. With the media constantly shifting its view to Islam, there has been an increased baseless fear of Muslims overall. Actions undertaken by extremist organizations, like ISIS, now become the excuse for the seeming apprehension of American Muslims. President Barack Obama recently made a trip to his first mosque in the country while stating that Muslims belong in this country and that it is possible to follow the Islamic faith while still contributing to society in America. Yet, on the contrary, current presidential candidates have discussed potentially barring Muslims from this country, an idea that may have once seemed absolutely absurd before.

This has resulted in cases of prejudice and discrimination towards Muslims. Shops are now displaying signs that say Muslims aren’t allowed as society is assuming that the second largest religion with over one billion followers is barbaric and inherently violent, when that is truly not the case. With increased cases of physical and verbal abuse towards Muslims, it becomes vital to examine this issue of the rise of discrimination in the West. In his recent visit to a mosque in Central Africa, Pope Francis told worshipers that, “Christians and Muslims are brothers and sisters, and we must act as such.” However, society seems to overlook these lessons taught by its leaders. We implore you to come out and learn from our esteemed speakers who will discuss this matter and its solutions to rid our society of hatred and prejudice.

Nasheed recitation will follow the program and refreshments will be served.

For questions or concerns, please contact us at info@muslims4peace.org 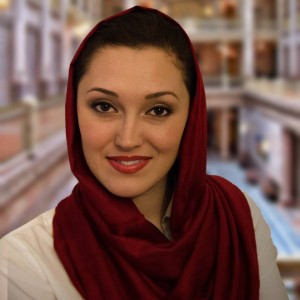 to her role as Executive Director of the Muslim Community Network. Her experience includes a range of initiatives with non-profits and organizations on human rights and social service with a particular focus on youth development and women’s empowerment.

Ms. Tasca has worked as a peer educator and advocate for survivors of sexual assault and domestic violence, a teacher in an underserved urban school district, and a development and communications consultant for non-profits. While still an undergraduate at Temple University, Ms. Tasca served on the Human Rights Defenders 2008 Delegation to Guatemala with the DC-based Guatemalan Human Rights Commission investigating the genocide of indigenous peoples, the perpetration of human rights abuses, and endemic violence against women.

Her experience working at home and abroad with diverse government officials, activists, academics, religious and community leaders, and civil society organizations make her aptly suited to connecting people from many walks of life. Her interest in interfaith collaboration and dialogue has inspired a passion for promoting greater solidarity and understanding beyond religious, national and ethnic lines. Most recently, she worked with the Arigatou International in coordinating the World Day of Prayer and Action for Children on an array of peace and ethics education programs and other activities to end violence against children on Universal Children’s Day and year round.

Ms. Tasca is also a published writer and speaker who regularly contributes to Coming of Faith and was featured in the Spring 2014 edition of AFTAB, New York University’s literary magazine. In April 2014, she was a panelist at Hofstra University MSA’s “From the Mouths of Muslim Women” event where she spoke about identity politics, the challenges converts face in finding acceptance within and outside the Muslim community, and the concept that Muslim women are the only experts on the experiences of Muslim women. 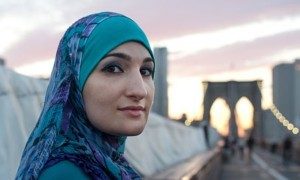 Linda Sarsour is a working woman, community activist, and mother of three. Ambitious, outspoken and independent, Linda shatters stereotypes of Muslim women while also treasuring her religious and ethnic heritage. She is a Palestinian Muslim American and a self-proclaimed “pure New Yorker, born and raised in Brooklyn!”

Sarsour is the former executive director of the Arab American Association of New York and co-chair of the Women’s March on Washington, which advocated for just legislation and policies regarding human rights and other issues in the largest single-day demonstration in U.S. history. Linda is most notably recognized for her focus on intersectional movement building.

Linda has been at the forefront of the debate around the New York Police Department’s unwarranted surveillance of the American Muslim community. She continues to work with city officials and allies to push legislation and policies that respect the dignity and civil rights of New York residents while maintaining safety and order. Linda was recently named American Muslim of the Year by the largest Muslim civil rights organization in the United States, honored by the White House in 2011 as a “Champion of Change”, and received the 2010 Brooklyn Do-Gooder Award from the Brooklyn Community Foundation. Linda is also a board member of the New York Immigration Coalition, a coalition of over 200 nonprofit agencies serving the diverse immigrant communities of New York State and the Network of Arab American Professionals-NY Chapter. She has been profiled by PBS, Yahoo News, NY1’s One on One With Budd Mishkin, and the Guardian. She has been featured in local, national, and international media speaking on topics ranging from women’s issues, Islam, domestic policy, and political discussions on the Middle East conflict. Linda’s strengths are in the areas of civil rights in the context of national security, community organizing, civic engagement, and immigrants’ rights advocacy. 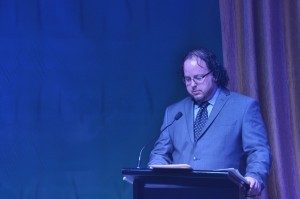 Dr. John Andrew Morrow was born in Montreal, Quebec, Canada, in 1971. Raised in a multilingual family, he lived in Montreal for ten years and in the Greater Toronto Area for another twenty. The product of a Catholic education, he completed his elementary school in French, his high school in English, and his university studies in English, French, and Spanish. He embraced Islam at the age of 16 after which he adopted the name Ilyas ‘Abd al-‘Alim Islam. After completing his Honors BA, MA, and PhD at the University of Toronto, where he acquired expertise in Hispanic, Native, and Islamic Studies, he pursued post-graduate studies in Arabic in Morocco and the United States. Besides his Western education, Dr. Morrow has completed the full cycle of traditional Islamic seminary studies both independently and at the hands of a series of Sunni, Shi’i, and Sufi scholars. Not only is he a senior scholar, academic, and professor, he is also a respected ‘alim holding the titles of ustadh, duktur, hakim, and shaykh. Dr. Morrow has spent over a decade and a half in the United States working at various universities including Park University, Northern State University, Eastern New Mexico University, the University of Virginia, and Ivy Tech where he was unanimously appointed to the rank of Full Professor. One of his most noteworthy and memorable experiences involved working as a professor of advanced Spanish, Islamic culture, and world literature for the Institute for Shipboard Education’s Semester at Sea Program. Aside from his academic duties, Dr. John Andrew Morrow is the Director of the Covenants Foundation, an organization dedicated to disseminating traditional, civilizational, Islam; promoting Islamic unity; protecting persecuted Christians; and improving relations between Muslims and members of other faiths. He regularly travels the world to promote peace and justice. 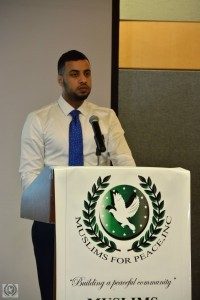 Lecturing for 10 years and have delivered talks across Europe, North and South America, Africa and Mid East as well as major universities both in UK and America. Primary focus is on contemporary issues facing todays youth in the West and drawing on examples from Ahlul Bayt (as) to deal with our social problems. Proactive in Dawa and interfaith both in South Africa’s deprived townships, where my students went on to be accepted by hawza in Najaf and Qom. Three of them are now resident scholars in South Africa and I continue to supervise and prepare their material for majalis. He has been running a number of successful workshops dealing with drug related issues, alcohol abuse, general addictions as well as domestic issues such as parenting, domestic violence and workshops for newly wed couples and new families.

Currently working with a number of priests from the Sikh faith, Hindu Brahmans, Jewish, and American Christian communities in Florida, Michigan, Texas, NYC to build bridges between faith centers. He is also working with a number of homeless shelters and care homes where we take youth from mosque to feed and care for their fellow human beings. This helps to prepare them as ambassadors of the Imam (atfs) as well as becoming better practicing Muslims. Secular studies are in Media and Public Relations as well as World Theatre and Poetry.

Religious studies are self taught through continues reading under the guidance of his father who has completed some Hawza studies as well as the guidance of Shaikh Ayub Rasheed, Shaikh Jaffer Najim, Shaikh Hassan all in London.