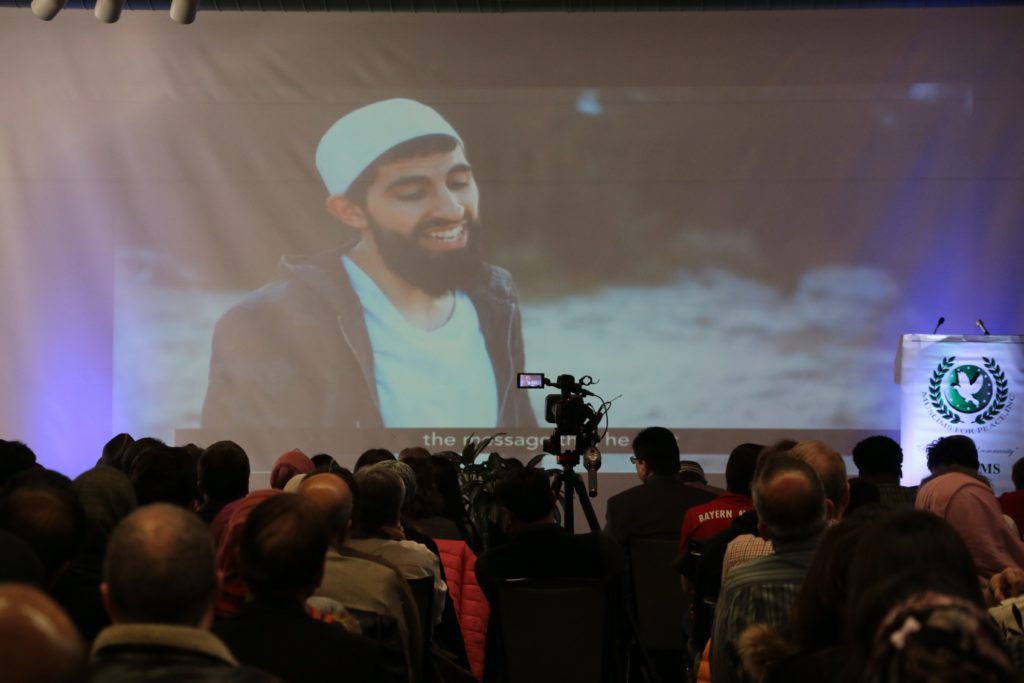 PISCATAWAY, NJ — March 9, 2017 — This weekend at the Muslims for Peace 10th Annual Prophet Muhammad Day, a powerful lineup of speakers from diverse backgrounds and faiths delivered empowering messages that promoted peace, unity, and greater interfaith dialogue at the Busch Campus of Rutgers University. Hawaii Representative Tulsi Gabbard (D-HI), the first Hindu to serve in Congress, shared a motivational message for peace, religious freedom, and inclusivity. The Congresswoman has taken a thoughtful and nuanced approach towards Muslim communities — currently she is the leading voice advocating an end to extremist violence against Shia and Sufi Muslims in Pakistan, which has spanned over 50 years. She has also emphasized that the vast majority of Muslims follow the spiritual path of Islam within their own lives in a pluralistic, peaceful way and stood against the recent travel ban on 7 majority-Muslim nations by President Trump. She later took questions from students and community leaders in the audience and praised the important work they are doing to promote interfaith understanding in their own spheres of influence. Highlights from Congresswoman Tulsi Gabbard’s inspiring remarks are available here, and some excerpts are below:

“Ultimately, the only way we can defeat terrorism is by wielding a superior truth. To defeat terrorism, every Imam, Priest, Reverend, Rabbi, Guru, and spiritual teacher must articulate this central truth—that real religion is love, and love must be freely given, it cannot be forced. A loving relationship with God can only be initiated out of an individual’s free choice. When this truth is heard, understood, and accepted in all corners of the globe, then we will have peace. This ideology of inclusivism, of aloha, of love and respect for others, needs to be promoted around the world in every mosque, temple, synagogue and church. Only this inclusive ideology of aloha can defeat the exclusive ideology of terrorism. When a society fails to cultivate this love, and fails to respect individuals’ freedom of choice, such societies inevitably end up in great darkness and suffering. Let us be brave and forceful in standing up for each other’s rights to live and worship freely and let us not be afraid to say that whoever threatens that right for anyone of us will have to face all of us together. Let us be inspired by the vision put forward by our nation’s founders, and challenge those who are fomenting religious bigotry to do the same. Rather than pour fuel on the fire of darkness, divisiveness, and hatred, let us bring the light found in the aloha spirit to our lives, our country, and the world. Let us be inspired as we join hands, working toward the day when everyone—whether they be Hindu, Buddhist, Christian, Jew, Muslim, or atheist, or others—can live in peace and freedom from fear. Let us confront hatred with love. Confront bigotry with aloha. Confront fear with courage. Let us truly live aloha in our actions, in our words, and in our hearts.”

Another speaker at the event, renowned journalist Mehdi Hasan, urged the audience not to become complacent or demoralized with President Donald Trump in power, saying “Across the country, many have found President Trump’s rhetoric and policies to be harshly critical of Muslims.” Embattled Attorney General Jeff Session called Islam “a toxic ideology.” State Department Secretary Rex Tillerson was on record for saying that he has no problem with creating a registry that would track Muslims, something Trump had called for in his campaign. Former House Speaker Newt Gingrich (R) called for testing every Muslim and deporting those who believe in Sharia, or in the system of Islamic laws.

Imam Mustafa El-Amin of Masjid Ibrahim, Newark, urged a similar approach: “Build good loving relationships and a strong faith in God—this is the only way to extinguish the fire of bigotry, hatred, and racism. As Mahatma Gandhi once said, “The way you make a difference is to engage in the world around you.”

Rabbi Marc Aaron Klein of Monmouth Reformed Temple also called for continuing dialogue among the different faiths: “We share one soul and that’s why we’re here today. We believe in the power of prophecy. If one is in need, it is in our need to give”. He was grateful for the support the Muslim community has shown toward the Jewish community in the wake of the desecration of several Jewish cemeteries. “You can’t have peace for one unless you have peace for all.” As the Muslims for Peace event organizers expected, a few individuals from outside of the university and surrounding community attended the conference with intentions to disrupt the event and heckle the guest speakers. However, the overarching message for peace, unity, and religious freedom resonated loud and clear.