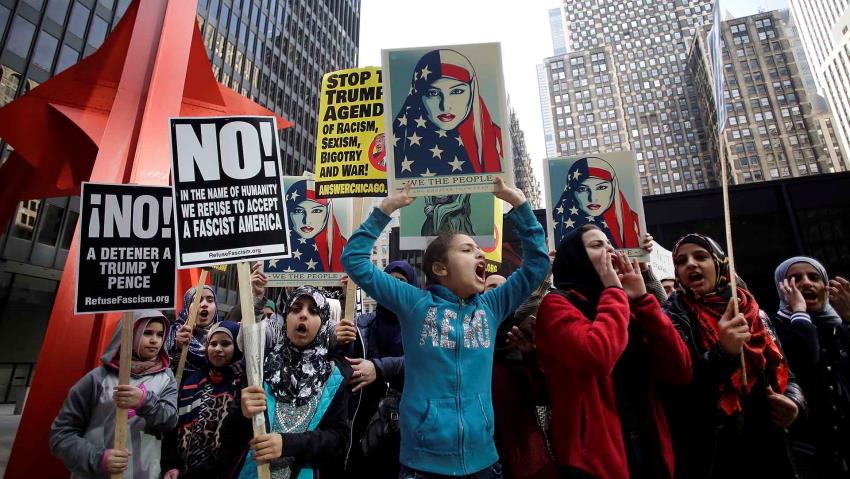 Comment: Global icon Kareem Abdul-Jabbar, writing exclusively in The New Arab, issues a rallying cry of tolerance and inclusion as attacks on Muslims soar in a climate of fear.

I’ve been a Muslim-American for nearly fifty years, about the same age as Astroturf and Doritos. During that time, the population of Muslims in America has more than tripled, from a million in 1968, the year of my conversion, to 3.3 million in 2015.

Over that same period, my beliefs as a Muslim have evolved, just as America’s attitude toward Muslims has devolved.

I converted while a student at UCLA. We were the reigning national champs in men’s basketball and I was one of the leading players in the country, so whatever I did generated massive national publicity. Announcing I was no longer a Catholic, as my parents had raised me to be, but a Muslim, a religion fairly unknown to most Americans, resulted in mixed reactions.

Many people responded the way my teammates did, with curiosity and support. Some people reacted with hostility or indifference.

The hostile group felt personally insulted, as if I’d sucker-punched the Statue of Liberty right after she’d given me a slice of cake. After all, to them I was the example of the Good Negro, the black kid from Harlem who was given a full scholarship to UCLA and became a millionaire athlete. What did I have to gripe about?

Of course, those people weren’t around when fans would shout ‘nigger’ at me from the stands, or throw things at me from hotel windows. Nor did they pay attention when states kept passing laws to keep people of color – my people – from voting. Yes, I had gotten my piece of the pie, but I couldn’t really enjoy it unless everybody else got a fair shot at their piece, too.

When Kareem Abdul-Jabbar first converted, Islam wasn’t well-known in the US [Iconomy]

My conversion to what Americans at the time thought of as some exotic foreign religion – ‘foreign’, despite it coming from the same geographical area as Christianity – wasn’t a rejection of American values, as my critics complained, but a rejection of hypocrisy.

The Catholic Church had used biblical passages to justify slavery – and in the Catholic schools that I attended, people of color were excluded from lessons as never having accomplished anything worth mentioning. For that reason, I rejected the religion and name of the slaveholder who had owned my family’s ancestors, and I embraced Islam, a religion practiced by as many as 30 percent of American slaves from Africa. I felt more comfortable and more connected to my heritage as a Muslim.

Although I endured my share of anger from fans who felt personally betrayed, I never wavered in my commitment to Islam. However, I still had the advantage that most Americans didn’t know what Islam was – nor did they care.

All that changed with the terrorist attacks of 9/11. Today, Muslim-Americans face increasing hostility in the form of violence and/or discrimination. Even when there is no overt aggression, just living under such intense scrutiny from our neighbors creates a numbing anxiety that affects our health and happiness.

And it’s even worse for our children, because they don’t understand the unjustified anger toward them.

“To them I was the example of the Good Negro… What did I have to gripe about?”

This is not paranoia; the threat is real. According to the Southern Poverty Law Center, the number of active anti-Muslim hate groups has tripled in one year: up from 34 in 2015 to 101 in 2016. In the first 34 days following the election of President Trump, there were 1,094 hate crimes in the US.

Clearly, the election of a man who has preached racism, misogyny, and xenophobia has emboldened the faction of society that is programmed to hate and doesn’t have the willpower or intelligence to free themselves. Their parents and grandparents were bigots, so, lacking the critical thinking skills to choose for themselves, they just sink into bigotry as if it were quicksand, which it is.

This malignant segment runs through society like an underground river of raw sewage. Most Americans are embarrassed by its presence and are grateful it remains out of sight and smell. Unfortunately, when Donald Trump ran for office, he was so desperate to form a coalition of the outliers of society that he drilled down into the ground, tapped into the sewage, and released a geyser of hate. Suddenly Nazis, KKK, misogynists, anti-Semites, homophobes, and racists everywhere spewed through mainstream society.

Kareem Abdul-Jabbar was a high-profile athlete even as a college player; five decades later he remains the NBA’s all-time top scorer [Iconomy]

This sewage infected otherwise benign people into thinking maybe there really was something to all this fear-mongering.

Fear is always the downfall of otherwise good people.

It’s easy to do the right thing when everything is going smoothly. But it’s what people do when they are put under pressure that reveals their true values.

Our Constitution is the most magnificent political document in history, laying out a blueprint for the most advanced structure of government under the most advanced set of principles ever devised. Americans rightfully celebrate this. However, it’s shocking to see how many of these self-proclaimed patriots are willing to abandon all those principles of equality when they get a little scared.

What’s frustrating for Muslim-Americans is that most of the fears white Americans have of them is unfounded in reality. It’s based on politicians like Donald Trump and biased media like Breitbart and Fox News whipping them into a mob-like frenzy so they don’t bother to look at the facts.

Facts that prove, according to the New American Foundation, that more Americans are killed by white terrorists than jihadists are meaningless in swaying public opinion. Between 2004 and 2015, there were nine terror attacks in the US by self-proclaimed Islamist extremists, but there were 18 terror attacks by white non-Muslims.

A 2016 study by Chapman University showed Americans’ second biggest fear was Islamic terrorist attacks, even though only 94 Americans were killed between 2005 and 2015 through such attacks. Yet during that same period, there were 301,797 gun-related deaths in America. Still, the survey showed people were more afraid of restrictions on gun ownership (number five), than they were the death of a loved one (number six).

Still not convinced? Both the Washington Post and the Huffington Post reported that in 2015 more Americans were shot and killed by toddlers than were killed by Islamic terrorists. America’s priorities about what to realistically fear are seriously skewed.

As long as politicians can keep Americans focused on an “enemy,” we aren’t supposed to notice that they are accomplishing very little to improve our daily lives. That’s why the World Health Organization released a 2017 study that shows America’s life expectancy slipping worldwide.

Within the next 13 years, South Korea will have the world’s highest life expectancy, while the US will be on a par with Mexico and Croatia. Maybe those 101 anti-Muslim hate groups should focus on that – because it will have a more direct effect on their children and grandchildren than their Muslim neighbor’s prayer habits.

This is the reality of being a Muslim-American today. It’s the same reality that people of color, immigrants, the LGBT community, women, Jews, and others have faced for centuries in this country. But when we look at the list of the marginalized, we can see how many people that includes. When you add them together, they actually form a majority of the people in the country – who have allowed themselves to be bullied only because we haven’t all come together as one powerful entity.

Since retiring from basketball, Kareem Abdul-Jabbar has become a role-model of community leadership, and was awarded the Presidential Medal of Freedom,
the US’ highest civilian honour [AFP]

Muslim-Americans have a responsibility to educate our neighbors about the real meaning of Islam.

We can do this through words, but even more effectively through actions. When 150 Jewish headstones were vandalized in a St. Louis cemetery in February, two Muslim-American activists launched a campaign to help pay for repairs. One of the activists, Tarek El-Messidi, explained his actions by citing a story about the prophet Muhammad standing in respect as a Jewish funeral procession passed by. When asked why, he responded: “Is it not a human soul?”

That same month, a mosque in Texas was destroyed by a fire, but within two days they had raised nearly a million dollars in donations to rebuild. Local Jewish and Christian leaders opened their synagogue and churches to accommodate Muslims who wished to gather to worship.

These are the shining examples of true compassion for and unity with the values of America as embodied in our different religions or those without religious affiliations. For Muslim-Americans to get through this period of irrational fear, we need to actively support other groups facing discrimination, whether that discrimination comes from random people or from an administration out of touch with the majority of people and with America’s values of inclusion.

This can be done by donating money to groups like the ACLU, the NAACP, and other groups fighting daily the legal battles that are necessary to defend our rights. It can also be done by joining public rallies that protest any injustice to marginalized groups. And it can be done on a more personal basis simply by reaching out to anyone who looks different than you.

Kareem Abdul-Jabbar is a global icon considered one of the greatest basketball players of all time; a six-time NBA champion whose points-scoring record still stands as the highest in NBA history. He is also one of a handful of influential and respected black men in America to have a national platform as a regular contributing columnist for The Washington Post and Time Magazine, where he shares his thoughts on the most socially relevant and politically controversial topics facing the United States.

The 7-foot-2 Hall of Fame center, appointed a US Cultural Ambassador in 2012 by then Secretary of State Hillary Rodham Clinton, serves as chairman of the Skyhook Foundation, bringing educational STEM opportunities to under-served communities through innovative outdoor learning.