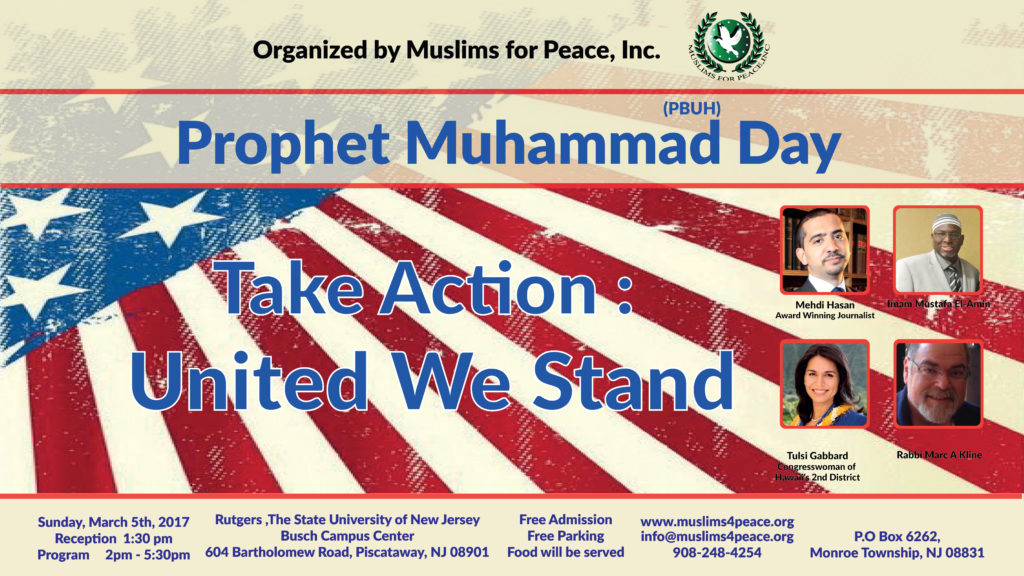 The 10th Annual Prophet Muhammad (s) Day event will focus on the current state of political affairs in the country, calling for awareness, concern, and action to combat racism and bigotry of Muslims. By now, everyone has heard of the current Muslim Ban being placed on citizens and residents of seven prominent Muslim countries. Right now, this ban targets Muslims and shows the embedded racism and hatred of Muslims in the current leadership. Let us stand in solidarity with the marginalized and underrepresented minorities and put an end to the hatred. Let us empower ourselves and have our voices heard. #MuslimBan

(Award-winning British journalist)
Mehdi Hasan is an award-winning British journalist, broadcaster, author and political commentator. He is the presenter of both UpFront (filmed in Washington DC) and Head to Head (filmed at the Oxford Union).He moved to Al Jazeera from the Huffington Post UK where he was political director. He has been named one of the 100 ‘most influential’ Britons on Twitter, and was included in the annual global list of ‘The 500 Most Influential Muslims’ in the world (‘The Muslim 500’). His debate-winning speech at the Oxford Union on Islam and peace went viral online, amassing more than two million views. Mehdi is also the author of two books – a biography of former Labour Party leader Ed Miliband and an e-book on debt and the financial crisis. 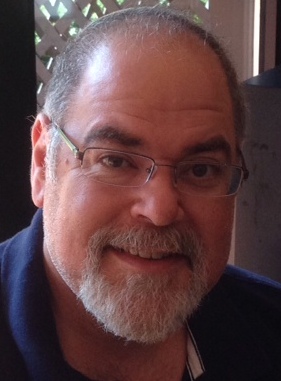 Rabbi Kline has taught Ethics, Philosophy, Religion and Government courses at the high school, college, and graduate school level for most of the last fifteen years. In Lexington, Rabbi Kline served as an adjunct instructor at the Disciples of Christ Lexington Theological Seminary (Pastoral Care and Diverse World Cultural Worship), Transylvania University (Jewish – Christian Relations), at the University of Kentucky (Jewish Thought and Culture), and Eastern Kentucky University (Religion). At Temple, he teaches in our Religious school, joins Cantor Clissold to tutor each Bar/Bat Mitzvah student, and regularly runs diverse adult education programs.

Rabbi Kline has served as Chair of the Lexington Fayette County Urban Government Human Rights Commission. This commitment to social justice saw him co-lead the march on Columbia, South Carolina in 2000 to bring the Confederate Battle Flag from atop the Statehouse dome. His commitment to diversity sees him serving internationally on the Board of Directors of the Association of Reform Zionists of America (ARZA), where he is involved in the pluralism and peace process politics in Israel. Rabbi Kline has extensive Chaplaincy experience, and has devoted a great deal of time to community service in local and national organizations.

Rabbi Marc publishes a weekly Torah Commentary to an international E-mail list and a weekly digital periodical. He holds a deep commitment to fostering Interfaith relationships, mentors other clergy in pastoral care, and consults with religious, public, and private organizations, and schools on matters of leadership, diversity, social justice, and long range planning.

Previously widowed, he is married to Lori Bernard. They have seven children between them: Diogo, Doug, Corey (married to Adam), Joshua, Danielle, Ilana, and Rachel (who lives here with Rabbi and Lori).

Congresswoman of Hawaii’s 2nd DistrictEl
From a very young age, Tulsi has shown a passion for public service. Her commitment to serving the community and making a positive impact has influenced every major decision in her life. Her service has included working with at-risk youth, joining the Hawai`i National Guard and deploying twice to the Middle East, being elected to the Hawai`i State Legislature and the Honolulu City Council, having the honor of serving Hawai`i’s people in the U.S. Senate as legislative aide to Senator Daniel K. Akaka, continuing her ongoing work and leadership on environmental issues and projects, and now serving in Congress as the Representative for Hawai`i’s 2nd Congressional District.

Imam of Masjid Ibrahim in Newark NJ.Married with three children, two sons and one daughter.  Retired Newark Teacher, devoted 25 years to teaching Students with Special Needs. Received his BA degree in Community Development in 1979 and Master’s Degree in Public Administration in 1983 from Rutgers University. Performed Hajj in 1992. Authored several books. 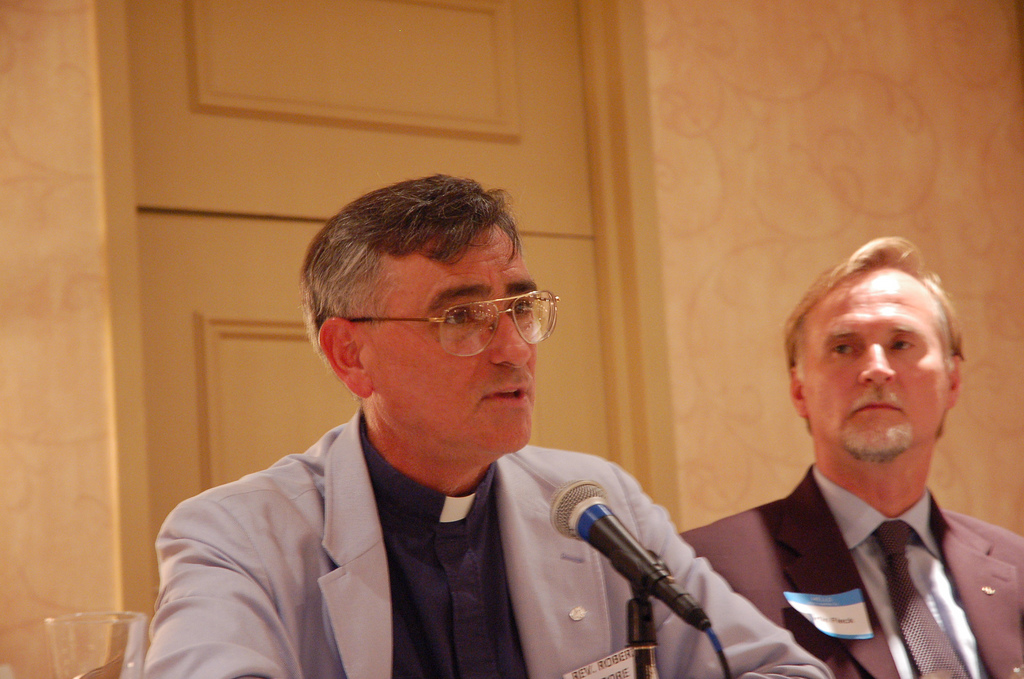 The Rev. Robert Moore has served since 1981 as full-time Executive Director of the Princeton, NJ-based Coalition for Peace Action (CFPA), a regional organization dedicated to global abolition of nuclear weapons, a peace economy, and a halt to weapons trafficking. From 1988-2014, he served as part-time Pastor of East Brunswick Congregational Church, and from 2014-2016 as part-time Co-Pastor of Christ Congregation in Princeton.

Prior to his current positions, Rev. Moore was for 3 and ½ years the National Secretary of Mobilization for Survival, a nationwide coalition of some 250 organizations working for disarmament and the conversion of resources from military purposes to urgent human needs. Previously, he served as Assistant Pastor to Luther Place Church in Washington DC.

Rev. Moore is an ordained minister in the United Church of Christ. He earned a Master of Divinity degree from Wittenberg University in 1976, and a Bachelor of Science in Engineering from Purdue University in 1972.

Since his fulltime peacemaking ministry began in 1978, Rev. Moore has played a leadership role in major activities in the US peace movement. He organized a press conference at Three Mile Island the day after the March 1979 nuclear accident, with experts including a Nobel Laureate in Biology, a radiologist, and a physician. The next day, the Governor of Pennsylvania heeded the experts’ call to evacuate pregnant women and children.

He chaired the first meetings of the Organizing Committee for the largest demonstration in US history, when 1 million came to New York demanding a Freeze and Reduction of Nuclear Weapons on June 12, 1982. He chaired the NJ Nuclear Weapons Freeze Referendum which in November 1982 received the support of 2/3 of New Jersey’s voters.

In 1993, Rev. Moore and CFPA played a major role in defeating the NRA’s attempt to rescind New Jersey’s Assault Weapons Ban; and in 2002 helped lead passage of the first in the nation Childproof Handgun Bill into law. 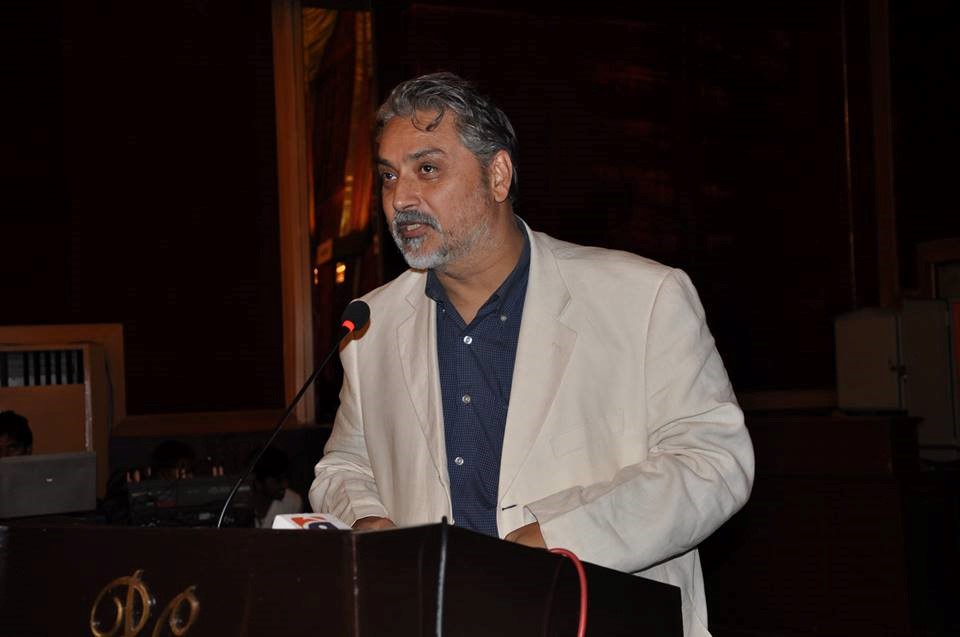 Syed Azhar Hussain, President and founder of Peace and Education Foundation. The organization have been recognized worldwide for deploying innovative and effective models for peace-making in the most intractable conflict regions like Pakistan, Afghanistan and Sub-Saharan Africa. His model has been written up as a best-practice and being taught in various international Universities in International Diplomacy and Peace Building courses.

He has served as Senior Consultant to the Government of Mexico’s Ministry of Education and as an adjunct professor at the Tecnológico de Monterrey University in Mexico, where he taught courses on international relations and history and served as a Master Trainer for Mexico Education Ministry. He advises UNDP, UNESCO and UN Alliance for Civilization on Peacebuilding in South Asia.

Mr. Hussain received numerous awards and recognition for his work in 2009 he received an award from UN Alliance for Civilization for his peace building work in Istanbul and in 2006 Peacemakers in Action Award by the Tanenbaum Center for Inter religious Understanding in New York. 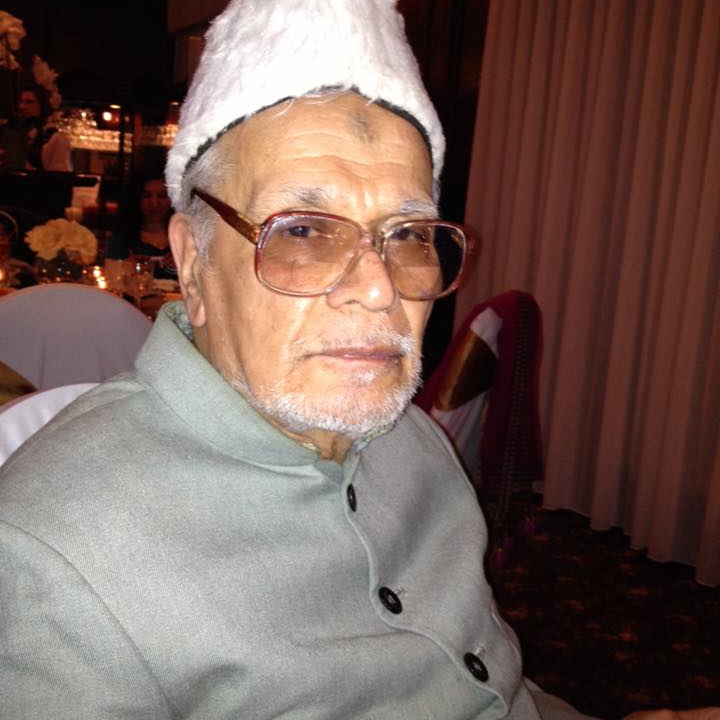 Mr. Mir Murad Ali Khan was born in Hyderabad, India, and migrated to America in 1969. He is an Electrical Engineer by education and training and has worked for organizations like OTIS Elevators, South Eastern Pennsylvania Transportation Authority and New York Transit.

He has been a beacon to the Muslim society of the tristate area and is an ardent lover and follower of Ahlulbayt and has associated himself with religious scholars from his youth. He possesses very extensive religious knowledge and has a gifted memory. He has written several papers on different topics of religion and history. His papers are of research quality, and has been compiled into several books.  He is one of the founder members of SANA one of the early registered non-profit Islamic society in America.

The New Jersey Muslim Voters Project is a statewide grassroots effort to empower NJ’s large and diverse American-Muslim community in public affairs so that our voices and values are reflected by the leaders who represent us.

Food will be served.

For questions or concerns, please contact us at info@muslims4peace.org.