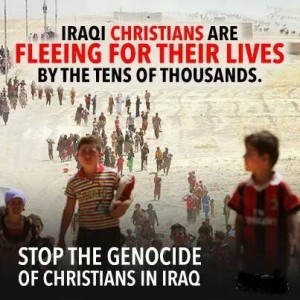 Muslims 4 Peace, a non-profit organization, is horrified and outraged by the atrocities being committed by the so-called Islamic State in Iraq and Syria, especially many minority groups.

“Muslims 4 Peace condemns IS on the brutal killings and harassment of Iraqi Christians, who are being threatened ‘to convert, leave or die,’” the statement reads. “Consequently, we stand united with the Christians and all other religious groups, such as the Yazidis and Shias who are fleeing for their lives by the thousands. They have sought refuge in Kurdistan, but so far the Obama Administration has refused to arm the Kurds, and humanitarian aid is very slow to arrive.

“Therefore the Obama Administration must take action to assist in arming the allies and the Kurds. Humanitarian aid must be brought in quickly to help the besieged Christians and other religious minority groups who are being oppressed. Genocide of all groups of people must be stopped in Iraq. Indeed, genocide has occurred before, but we cannot allow it to continue any further.

“Muslims 4 Peace views the actions of IS as inhuman, un-Islamic and totally repugnant. No religion condones the murder of women and children; hence, we implore the Obama Administration to take action and assist all those oppressed in Iraq.”

Several days ago, the United States committed to sending more troops, but in an advisory role. The U.S. military also was involved in rescuing several thousand Yazidis who were trapped on Mount Sinjar, after escaping the widespread slaughter IS was committing on them in several cities in Northern Iraq, such as Erbil. It scaled back rescue efforts after it deemed the crisis was not as bad as originally thought.

The Obama Administration supports the Kurdish community, and has vowed to arm its troops, known as the Peshmerga. While promises and commitments have been made, it’s unclear if they longtime Kurdish army has actually received any artillery. A recent Al Jazeera report found that many of the force’s current weapons date back to the early 1970s, while IS forces have a modern-day arsenal. Recently, the Kurdish and Iraqi military forces successfully regained control of the Mosul dam.

Still, Muslims4Peace calls on the administration to come up with a more comprehensive strategy to addressing the crisis, one that not only rescues the Yazidis and Iraq’s minority Christian community, long a target by insurgents. The strategy also should foster a stable, centralized government where no group –Shia, Sunni, Kurd, Turkmen, Yazidi, Christian – feels ignored.

Jawad al-Khoei, the Al–Khoei foundation’s director in Najaf, “Christians are our homeland brothers, and our duty is to do all we can to protect them from extremists and terrorists. All of our cities and homes are open to receive them. There would be no religious limits or clampdown, had they wished to settle down in Najaf temporarily or permanently.”

Prominent religious guide Sayyed Hussein al-Sadr issued a statement dedicated to the Jawad al-Khoei, the foundation’s director in Najaf “Christians are our homeland brothers, and our duty is to do all we can to protect them from extremists and terrorists. All of our cities and homes are open to receive them. There would be no religious limits or clampdown, had they wished to settle down in Najaf temporarily or permanently and they are our brothers in the country and in humanity, and have equal rights with all Iraqis.

Grand Imam Sayyed Ali Sistani’s spokesman, Ahmed al-Safi, denounced in his last sermon the “recent attacks on Iraqi minorities,” saying, “Tens of thousands of Turkmens, Shabak, Christians and other minorities are now living under harsh circumstances due to displacement from their areas, after terrorists took over their cities in Ninevah and other regions. The efforts exerted to look after them and alleviate their suffering are still subpar.”

Najaf provincial council announced “its complete readiness to receive displaced Christian families who have left their villages and homes in Mosul.” The council affirmed that “appropriate housing will be provided. Also, the Imam Ali Holy Shrine in Najaf and Imam Hussein Holy Shrine in Karbala are ready to host Christian families, and indeed competent committees are being formed in the two holy cities.”

An official of the Red Crescent that the province “has until now received more than 17,000 displaced, the majority of whom are sheltered in Hussainiyat [congregation halls for Shiite commemoration ceremonies], mosques, and other religious buildings. They are receiving support from humanitarian institutions affiliated [with] the Shiite authority, the Imam Ali Shrine and the people of Najaf.” officials met with two displaced Christian families who affirmed that they were receiving services and aid, as other displaced are.

It is important to note that the two holy cities of Najaf and Karbala were dominant Christian centers for centuries, where the ruins of old churches are located, some of which date back to the second century. In fact, until mid-20th century, some Christian and Jewish families were still living in the two cities, without being subjected to any kind of persecution or discrimination.