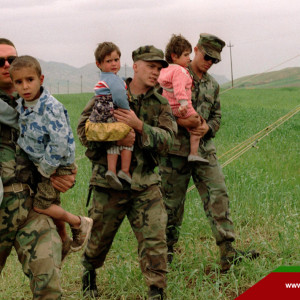 “Keep posting about Iraq. If something happens to us, people need to know why.”
~ Muhammad Raza

The conflict in Iraq has come to a head and it is heating up to violent proportions. At this crucial junction it is of paramount importance to understand where we should stand. It is imperative to analyze the situation and make sound judgment regarding what we should be doing and why. In this article, therefore, I shall attempt to elucidate briefly the key points we need to be focusing on in order to comprehend the crisis:

Iraq is a country situated adjacent to the Levant surrounded by Syria, Jordan, Lebanon and Palestine in the west, Iran in the east, Saudi Arabia and Qatar in the south and Turkey up north. As obvious, the nation holds an extremely advantageous position in the Middle East, strategically, and thus the center of attention for multiple interested parties. Religiously the country is a hotbed of holy sites frequented by Shiites, Sunnis and Sufis, home to the city of Najaf, housing the tomb of the First Shi’a Imam and Fourth Sunni Caliph, Hazrat ‘Ali ibn Abu Talib, and the region of Karbala, battlefield of the historic clash between the Umayyad Caliph, Yazid ibn Muaviya ibn Abu Sufyan, and the Third Shi’a Imam, Hazrat Husayn ibn ‘Ali. Shiites constitute the majority of the population in the country comprising close to 70% of the population followed by Sunnis filling out most of the remaining 30% ethnically divided between Arabs, Kurds and Turkmen. The country is also enriched with the second largest oil reserve in the world.

The modern day crisis in Iraq is a result of the fallout from the 2003 Iraq War led by the Bush Administration. That, however, is a topic of discussion for another day. Currently what we have in our hands is an issue that could very well cause the complete annihilation of the country of Iraq and, subsequently, the rest of the Middle East. The roots of the problem stretches back to the tyrannical reign of Saddam Hussein.
Saddam Hussein, when in power, was part of the Sunni minority in the country, responsible for the oppression of the Shiite majority. At the end of the Iraq War, following the fall of Saddam, it was the Shiite majority that took over power and reversed the situation. The turning of the tables, headed by Prime Minister Nouri el-Maliki, marginalized the Sunni minority and caused tension between the two Islamic denominational parties to simmer and boil. Thus, from the surface, the affair can very easily be painted as a gruesome sectarian warfare between Sunnis and Shiites. The reality, however, is much more perverse and complicated.

The 2003 Iraq War led by the United States made the region a breeding ground for terrorist parties, most of them inspired by the austere Wahhabi Islamic ideology propagated by Saudi Arabia. ISIS (Islamic State of Iraq and Syria), also known as Da’ish (ad-Dawlah al-Islamiyyah f’il-‘Iraq w’al-Shams) or ISIL (Islamic State of Iraq and Levant), is one such terrorist group, an off-shoot of the notorious al-Qaeda. The former splintered off from the latter after the current leader of al-Qaeda, Ayman az-Zawahiri, declared them to be ‘too extreme.’ They gained a strong foothold in the Levantine region following the events of the momentous Arab Spring in 2010 and the Syrian revolution against President Bashar al-Assad. During the uprising, as violence escalated, ISIS started attacking all other militant parties in the area including the Jabhat an-Nusra, Jabhat al-Islamiyyah and the Free Syrian Army. As of right now, they are the most barbaric yet organized terrorist organization in the Middle East.
ISIS plans to establish a so-called independent Islamic state, a pseudo-Caliphate in the lands of Iraq and Syria, simultaneously ‘cleansing’ the countries of minorities they deem to be impurities, such as the Shiites and the Christians. They wish to fulfill this goal through the means of vile execution and slaughter of the targeted groups. So far ISIS has been responsible for the defilement and destruction of numerous sacred sites revered equally by both, Shiites and Sunnis, such as the shrine of the great Muslim martyr, mystic and philosopher Hazrat Owais al-Qarani in ar-Raqqah, Syria, along with the devastation of many Sufi khaneqah and Christian churches. In their Twitter accounts, ISIS has openly threatened Shiites and vowed to exterminate them, posting tweets such as:

The sad reality of the situation in Iraq is that these barbarians have been referred to, countless times in the media, as Sunni rebels. As a Sunni Muslim myself, I find the label abhorrent. These bestial thieves and butchers are not Sunni, they do not represent Sunni Islam nor do they represent Islam. They are callous murderers and bloodthirsty fear-mongers brimming full with the venom of hate and wanton lust for human life. Fueled by the financial backing of Saudi Arabia, Qatar and Turkey, these monsters will stop at nothing short of a wretched apocalypse, turning the Levant into a rubble of ashes and necropolis of decapitated corpses.
The political and religious ideology of ISIS is not representative of mainstream Sunni Islam. Instead, what they symbolize is the ilk of the extremist Saudi Wahhabi movement, remnant of the ancient Kharijites, known for their puritanical beliefs and trigger-happy glee for death, brutally executing all those they considered to be unbelievers.

The situation in Iraq is not a sectarian affair. It is a political chess match involving multiple players puppeteering the very many militant factions present in the region. One such player is Saudi Arabia, fanning the flames of war in the region to spread their message while attempting to pose a substantial threat to their rival, Iran. It is an ideological warfare. Another player in the game is Qatar harboring a similar agenda as their Gulf contemporaries. Both countries are able to sustain their support of the terrorist organizations through their colossal financial backing provided by the Western buyers of their massive oil reserves, such as the United States. A third and quite an interesting ally of the militant group is Turkey, seeking to revive their glory days as the Ottoman rulers of the Sunni Caliphate. Such an ambition, though, is deluded. If ISIS does manage to establish a Caliphate in the Middle East, Turkey would be the last contender to be its ruler. ISIS evidently is not going to hand over power to anyone but themselves. Turkey is essentially feeding a dog that is going bite her back and ravage her to pieces when the opportunity presents itself. ISIS is beyond the control of anyone. They have to be neutralized.

Another group involved in the warfare is a peculiar one called Jaysh Rijal at-Tariqa an-Naqshabandia (JRTN) led by Izzat Ibrahim ad-Douri, former vice president and deputy chairman of the Iraqi Revolutionary Command Council. He was second-in-command and elected successor to Saddam Hussein. The primary goal of JRTN is to reinstate the Ba’ath party to power, supposedly due to the freedom the Naqshbandi Sufis enjoyed under the Ba’athist rule of Saddam Hussein. However, the group’s ties with the Naqshbandi Sufi Order is a farce. The real Naqshbandiyyah are peaceful people, far removed from militancy and politics. They have no interest in international affairs and conflict. In fact, they openly denounce any form of violence and involvement in warfare strictly goes against the central tenets of their creed. This group’s fallacious claims of being affiliated to the Naqshbandi Sufi Order is an ironic tragedy.

Thus, what is fairly obvious now is that this is not a Shiite versus Sunni issue but rather a high stakes political affair. ISIS and JRTN are not representatives of the Islamic Sunni ideology and, therefore, cannot be called Sunni rebels as the media would like to color them. Such misinformation has ruinous ramifications as laymen Sunnis, Shiites and non-Muslims who may be reading or watching the news will think that ISIS and JRTN are fighting for the cause of the suppressed Sunni population of Iraq. This is grossly untrue. In fact, Sunni scholars of Basra have openly denounced ISIS and called for the Sunnis to bear arms against them in defense. Addressing ISIS as ‘Sunni rebels’ legitimizes their false claims and slanders the global Sunni population.
Meanwhile Ayatollah Sistani has stated that it is wajib kifa’i for Muslims to stand against ISIS. This is important as, in Islam, there are two categories of a wajib action: wajib ‘ayni and wajib kifa’i. Wajib ‘ayni refers to an obligation imposed upon individual Muslims, e.g. the daily prayers, that cannot be fulfilled for one Muslim by another. Wajib kifa’i, on the other hand, are the obligations that is imposed upon the entire Muslim community and if one Muslim from the community fulfills the duty, it counts as the action of the entire community. For instance, burial rites of the dead is wajib kifa’i, meaning that if a Muslim dies in the community it is obligatory for the community to arrange for the dead person’s burial. However, not every single person in the community has to bear this responsibility. As long as someone is carrying out the procedures it counts as the fulfillment of the obligation upon the entire community.

The Ayatollah, by categorizing Jihad against the ISIS terrorists as wajib kifa’i, has thus relegated the duty to be fulfilled by the immediate Muslim community present in Iraq and the neighboring regions, in the process, discouraging Muslims outside the area from getting involved. In the address, the Ayatollah also meticulously refrained from using the words ‘Shiite,’ ‘Sunni’ or ‘Muslim’ issuing the obligation upon all members of the Iraqi community whether they be Shiite, Sunni, Muslim, Christian or Kurdish. This is a humanitarian struggle and we must all stand together against this threat regardless of our faith, ethnicity or nationality. It is, as said by the late great Reverend Martin Luther King Jr., “An Injustice Anywhere Is A Threat To Justice Everywhere.”