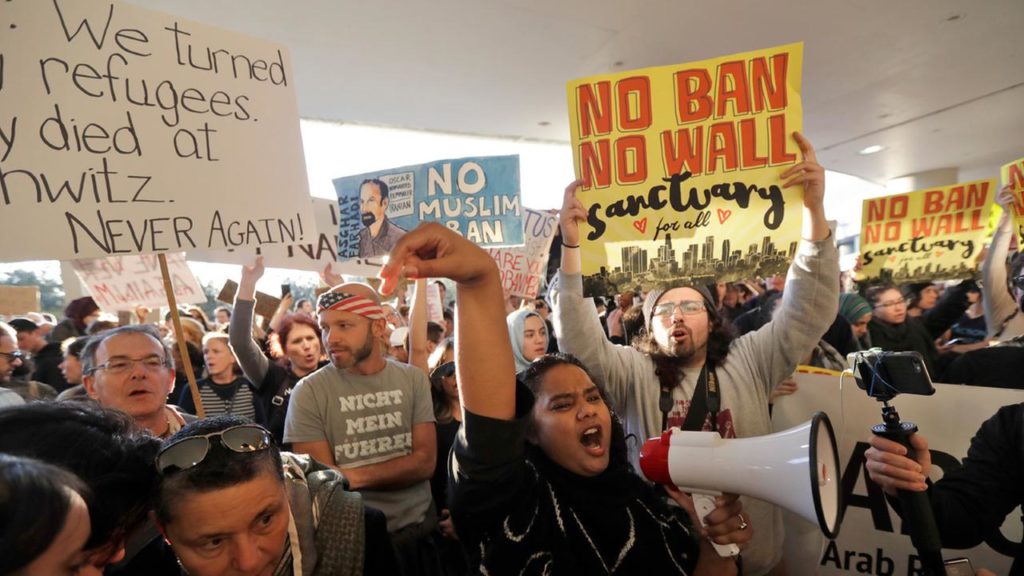 The 120 plus members of the New Jersey Interfaith Coalition find President Trump’s executive order to be un-American which indefinitely barring Syrian refugees from entering the United States indefinitely, and blocking all refugees from entry for 120 days and all citizens of seven Muslim-majority countries for 90 days.

This order does not represent what we believe America to be.  It represents a ‘guilty until proven innocent’ policy directed at Muslims. In particular, this ban puts at great risk countless Syrian refugees fleeing from horrific violence in their home country.  We must not forget the tragedy of ship loads of European Jews who were denied entry into the United States during the World War II era and, upon return, many of them lost their lives in the Holocaust.

Jesus answered this question: “Lord, when was it that we saw you hungry or thirsty or a stranger or naked or sick or in prison, and did not take care of you?” Then he will answer them, “Truly I tell you, just as you did not do it to one of the least of these, you did not do it to me.” – Matthew 25:44-45

We affirm our support for the admission of Syrian and all refugees, and our belief that religious tests for entry are unacceptable.  We should govern ourselves by the Constitution, not by fear.  We reject any immigration or other law or policy that makes distinctions based on religion or national origin.

We also join with others in supporting immigration reform that gives people a clear path to citizenship, instead of the building of walls.  The strength of the United States lies in the diversity of its people.

We stand with Muslims in decrying this demonization of Muslims, which impacts over three million peace loving American Muslims and 1.7 billion Muslims around the world. Rather than address security threats with the governments of these countries, this ban reinforces the most dangerous stereotypes of Muslims and Islam.

We remind ourselves that we are equal in humanity and have been created equal in the image of God. We should embrace our most deeply held values and commit to love each other regardless of the color of our skin, faith, gender, sexual orientation or national origin.

Christian denominations in this coalition believe that all faiths have truth about the love of God. In our sacred texts, we see people of many faith traditions in communion with the Creator — Hagar, Moses, Ruth, and Paul of Tarsus. How can we as Christians dare to judge or reject those whom God has protected, defended and loved?

We share the sentiments of Cardinal Joseph Tobin of Newark that the recent executive actions “are the opposite of what it means to be an American.  Closing borders and building walls are not rational acts.”  Cardinal Blase Cupich of Chicago describes these actions as “contrary to both Catholic and American values.  Have we not repeated the disastrous decisions of those in the past who turned away other people fleeing violence, leaving certain ethnicities and religions marginalized and excluded?”

The complete list of organizations in the NJ Interfaith Coalition is available on our web site, www.njifc.org. If you have any questions, please feel free to reach out to any of the following contacts.