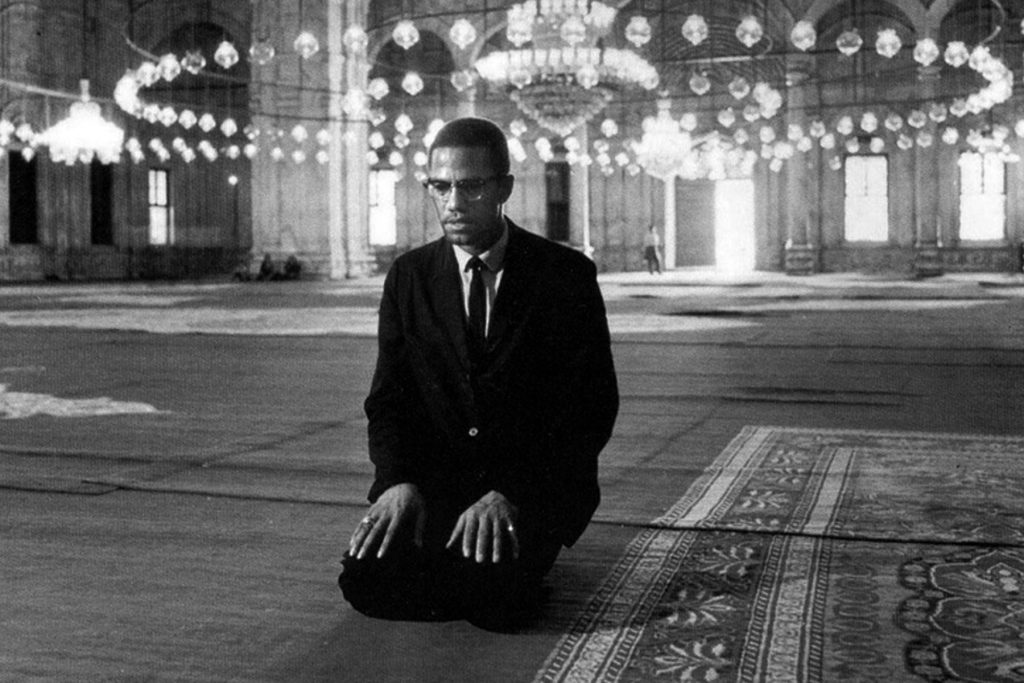 I have just completed my pilgrimage (Hajj) here to the Holy City of Mecca, the holiest City on earth, which is absolutely forbidden for non-Muslims to even rest their eyes upon. This pilgrimage is the most important event in the life of all Muslims, and there are over 226,000 who are here right now from outside of Arabia. From Turkey came the largest contagion, around 50,000 in over 600 buses. This refutes Westerner propaganda that Turkey is turning away from Islam.

I know of only 2 others who have made the actual Hajj to Mecca from America, and both of them are West Indians who also converts to Islam. Mr. Elijah Muhammad, 2 of his sons, and a couple of his followers visited Mecca outside the Hajj season, and their visit is known as the “Omra”, or Lesser Pilgrimage. It is considered a blessing in the Muslim World even to make the “Omra”. I very much doubt that 10 American citizens have ever visited Mecca, and I do believe that I might be the first American born Negro to make the actual Hajj itself. I’m not saying this to boast but only to point out what a wonderful accomplishment and blessing it is, and also to enable you to be in a better position intellectually to evaluate it in its proper light, and then your own intelligence can place it in its proper place.

This pilgrimage to the Holiest of Cities as been a unique experience for me, but one which as made me the recipient of numerous unexpected blessings beyond my wildest dreams.

Shortly after my arrival in Jeddah, I was met by Prince Muhammed Faisal who informed me that his illustrious father, his Excellency Crowned Prince Faisal had decret that I be that I The ruler of Arabia be his Guest. What has happened since then would take several books to described, but through the ***** of his Excellency I have since stayed in ***** hotels in Jeddah, Mecca, Mina – with a private car, a driver, a religious guide, and many servants at my disposal.

Never have I been so highly honored and never had such honor and respect made me feel more humble and unworthy. Who would believe that such blessing could be heaped upon an American Negro!!! (But) in the Muslim World, when one accepts Islam and ceases to be white or Negro, Islam recognizes all men as Men because the people here in Arabia believe that God is One, they believe that all people are also One, and that all our brothers and sisters is One Human Family.

I have never before witnessed such sincere hospitality and the practice of true brotherhood as I have seen it here in Arabia. In fact all I have seen and experienced on this pilgrimage as forced me to “re-arrange” much of thoughts pattern and to toss aside some of my previous conclusions. This “adjustment to reality” wasn’t to difficult for me to undergo, because despite my firm conviction in whatever I believe, I have always tried to keep an open mind, which is absolutely necessary to reflect the flexibility that must go hand in hand with anyone with intelligent quest for truth never comes to an end.

There are Muslims here of all colors and from every part of this earth. During the past days here in Mecca (Jeddah, Mina, and Mustaliph) while understanding the rituals of the Hajj, I have eaten. From the same plate, drank from the same glass and slept on the same bed or rug – with Kings, potentates and other forms of rulers – ******* with fellow Muslims whose skin was the whitest of white, whose eyes was the bluest of blue, and whose hair was the blondest of blond – I could look into their blue eyes and see that they regarded me as the same (Brothers), because their faith in One God (Allah) had actually removed “white” from their mind, which automatically changed their attitude and their behavior (towards) people of other colors. Their beliefs in the Oneness as made them so different from American whites that their colors played no part in my mind in my dealing with them. Their sincere to One God and their acceptance of all people as equals makes them (so called “Whites”) also accepted as equals into the brotherhood of Islam along with the non-whites.

The American Negro could never be blamed for his racial “animosities” because his are only reaction or defense mechanism which is subconscious intelligence has forced him to react against the conscious racism practiced (initiated against Negroes in America) by American Whites. But as America’s insane obsession with racism leads her up the suicidal path, nearer to the precipice that leads to the bottomless pits below, I do believe that Whites of the younger generation, in the colleges and universities, through their own young, less hampered intellects will see the “Handwriting on the Wall” and turn for spiritual salvation to the religion of Islam, and force the older generation to turn with them—

This is the only way white America can worn off the inevitable disaster that racism always leads to, and Hitler’s Nazi Germany was best proof of this.

Now that have visited Mecca and gotten my own personal spiritual path adjusted to where I can better understand the depth of my religion (Islam), I shall be living in a couple days to continue my journey into our African Fatherland. Allah willing, by May 20th before my return to New York, I shall have visited Sudan, Kenya, Tanguanyika, Zanzibar, Nigeria, Ghana, and Algeria.
You may use this letter in anyway you desire, 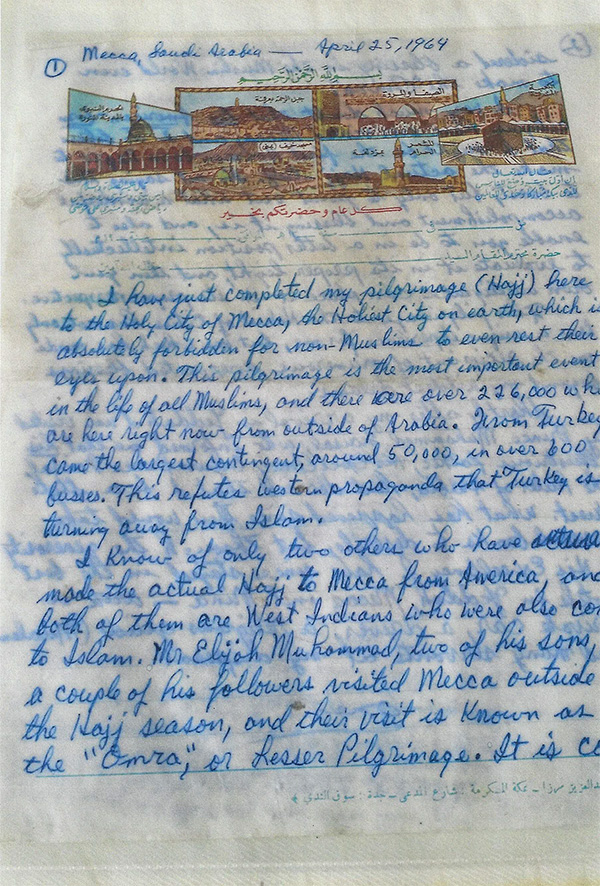 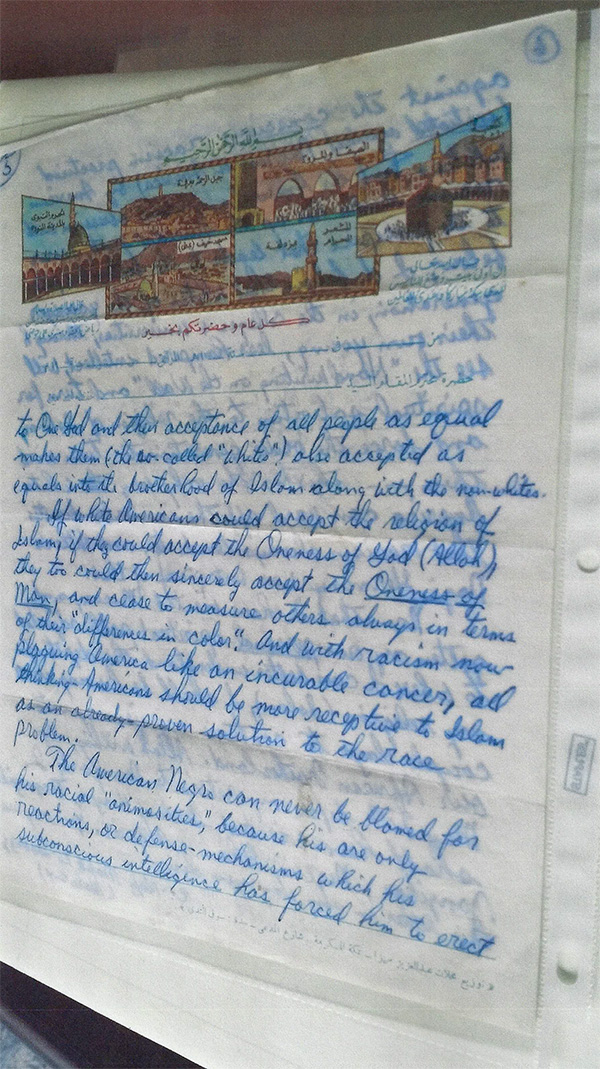 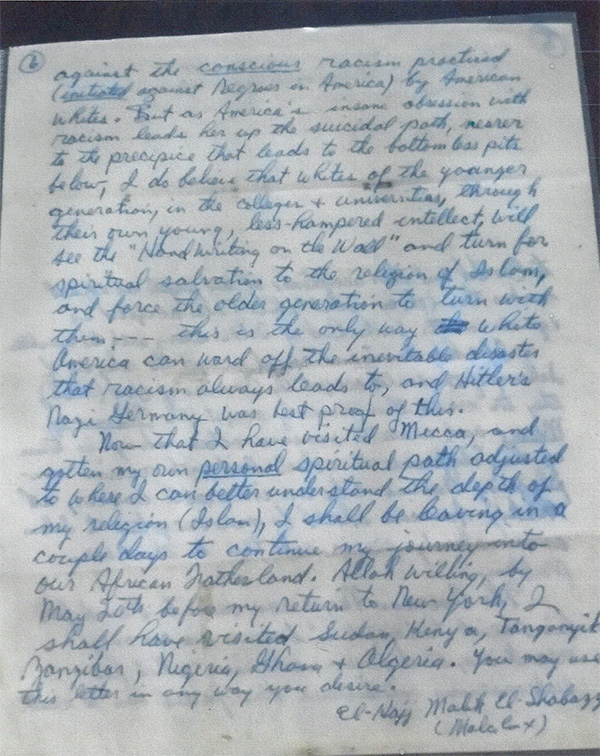