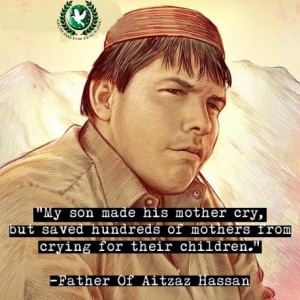 In several parts of the world today, killing of innocent life have become so rampant that it has become, unfortunately, nothing more than common knowledge in the news. However in reality no matter how many times a life is taken, that life is so precious and priceless that killing of one human being is like the slaughter of all of humanity. The Holy Quran emphasizes the severity of taking innocent life as such in chapter 5 verse 32 stating, “If any one killed a person, it would be as if he killed the whole of mankind..”

At the same token, if any one choses to save a life, then he saved humanity. The same verse above continues with the following words,

“And if any one saved a life, it would be as if he saved the life of the whole of mankind…”

Both of these statements has recently been exemplified in an incident that occurred in Pakistan on January 6, whereby a school boy, Aitzaz Hassan, whose age is pegged from anywhere between 15-17 years old, tackled a bomber who tried to enter a government school wearing a suicide vest loaded with explosives.

Hassan, saw the bomber and challenged him even though his friends told him not to. He chased him then finally threw himself on top of the bomber outside the main gates of his school. Hassan tackled him and the device exploded. Both Hassan and the bomber died. Only two others were injured.

Hassan’s bravery protected hundreds of schoolchildren in Hangu, Pakistan from being killed. According to police official, the school with over 2,000 students, was the target of the attack,.

Hassan has been nominated by the President of Pakistan to receive the top civil award given for bravery. What is more, The school will be renamed after the young man as a way of honoring his bravery.

From this incident, it can be demonstrated that Hassan’s deed of sacrificing his life so that others would be saved, truly did save humanity in more ways than one. Moreover, the bomber who took the life of that one boy was felt greatly by the entire community and world to such an extent that social media campaigned for the teenager to be recognized with the award of bravery in Pakistan. Also, he received the first Gallantry Award by the International Human Rights Commission (IHRC) acknowledging his sacrifice.

Therefore, Hassan’s one loss of life was the loss of mankind. This can never be replaced.

Nonetheless the teenager’s father, Mujahid Ali Bangash, 55, eternalized his life by saying: “Aitzaz has made us proud by valiantly intercepting the bomber and saving the lives of hundreds of his fellow students… My son made his mother cry, but saved hundreds of mothers from crying for their children.”

Hassan’s cousin Mudassir Bangash who described him as an accomplished student not only excelled in all extra-curricular activities, but he truly elevated in human ethics and honor.

It is the selflessness of such indiviudals that truly makes a human being proud to find within the human race people who can rise far above one’s ego and self-interest. This is what truly makes a person eternal.